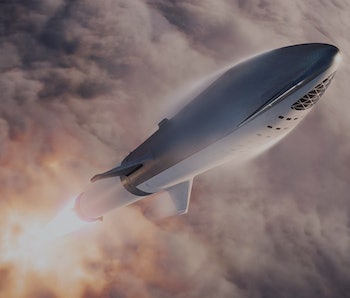 SpaceX’s BFR is taking on a new shape. Just days after sharing images of a new Tintin-inspired design for the Mars-bound rocket, CEO Elon Musk has posted more concept art alongside details of some additional features. The BFR, expected to complete test firing next year, could send the first humans to Mars as early as 2024.

It’s a big development for the company’s largest-ever rocket, unveiled 12 months ago at the International Astronautical Congress in Adelaide, Australia. The rocket eclipses even the Falcon Heavy, the world’s most powerful operational rocket that completed its first test launch in February. Where the Heavy has a liftoff thrust in the region of 2,500 tons, the BFR has a thrust of 5,400 tons. The new rocket uses 31 Raptor engines, powered by liquid oxygen and methane.

The altered design, depicted below, adds new fins to the rocket that Musk admits bear a resemblance to the ones found in the Tintin comics:

The redesigned nose plays a key role in operations:

However, the new renders also lack a key feature found on previous designs:

The rocket has been designed with reusability in mind, enabling humans to visit Mars and refuel by extracting resources from the area. The company will send two unmanned ships to Mars in 2022, followed by two more unmanned ships and two manned ships in 2024. Each ship will carry around 100 tons, meaning the six will send double the mass of the International Space Station to Mars. These will be used to set up refueling stations, laying the groundwork for self-sufficiency, and making the first step to a multi-city Martian colony.

The BFR is also expected to send the world’s first private passenger on a trip around the moon. SpaceX announced the development last week, declaring that “only 24 humans have been to the Moon in history” and “no one has visited since the last Apollo mission in 1972.” The company plans to announce further details about the identity of the passenger and their reasons at a livestreamed event on Monday at 6 p.m. Pacific time.

While it’s a serious moment for the company, Musk couldn’t help dropping a reference to comedy spy thriller Austin Powers in the replies:

Doctor Evil’s dream of sharks with lasers is coming to life.