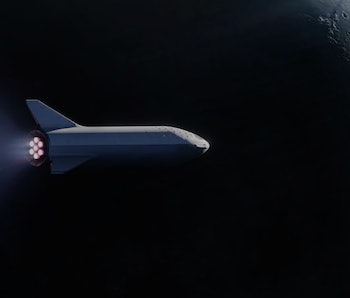 Elon Musk’s SpaceX will update the public on Monday on its deal to send a human on a trip around the moon, it announced Thursday night. The lunar recreational mission will be launched on BFR, the in-development rocket designed to launch humans to Mars. The journey will mark the first time a person on a private spacecraft will fly around the moon.

SpaceX hyped a webcast of the big reveal this way:

SpaceX has signed the world’s first private passenger to fly around the Moon aboard our BFR launch vehicle - an important step toward enabling access for everyday people who dream of traveling to space. Only 24 humans have been to the Moon in history. No one has visited since the last Apollo mission in 1972. Find out who’s flying and why on Monday, September 17 at 6pm PT.

The announcement marks a key development in plans to send private citizens into space. SpaceX announced in February 2017 that two private citizens had paid for a lunar orbit trip, which would take them deeper into space than any human has ever ventured before. The original announcement claimed the passengers would enter space in the Crew Dragon capsule, lifted into orbit on board the Falcon Heavy rocket.

The mission was scheduled for some time after the capsule took the first NASA astronauts to the ISS, a milestone scheduled for around April 2019. That plan seemed in doubt, however, when Musk told reporters the day prior to the Falcon Heavy test launch in February that the rocket probably wouldn’t send people into space.

“It looks like BFR development is moving quickly, and it will not be necessary to qualify Falcon Heavy for crewed spaceflight,” Musk said in February of this year after the Falcon Heavy demonstration launch. “We kind of tabled the Crew Dragon on Falcon Heavy in favor of focusing our energy on BFR.”

The BFR is a gargantuan rocket, first detailed at the International Astronautical Congress in Adelaide, Australia, in September 2017. Where the Falcon Heavy has a liftoff thrust of around 2,500 tons, placing it as the most powerful rocket in operation, the BFR has a thrust of 5,400 tons. SpaceX plans to use all this power to send two cargo rockets to Mars in 2022, before sending two further cargo rockets alongside two manned rockets to the red planet in 2024. The reusable design of the rockets means the humans can use the planet’s resources to collect together fuel and return on the same rocket.

While the company’s private spaceflight plans have been relatively quiet since the February announcement, SpaceX officials indicated that the company still planned to move ahead with its historic flight. SpaceX representative James Gleeson said in June that the company is “still planning to fly private individuals around the moon, and there is growing interest from many customers.”

The company is expected to complete the first hop test firing of the BFR next year. A 95,000-gallon liquid oxygen tank arrived at the Boba Chica facility in Texas in July, expected to support propellant-loading operations during vehicle tests. The tank will sit alongside a 600-kilowatt solar array and two ground station antennas. Company president Gwynne Shotwell has previously indicated that Boca Chica will support these initial tests.