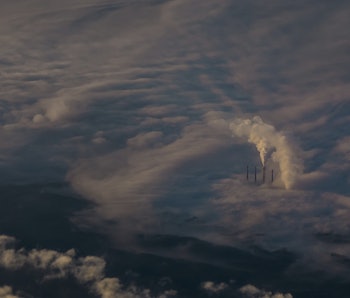 In the latest edition of turn-based strategy games applied to real life, the star is climate change. Except instead of angry play-tenants flipping a table because they landed on Boardwalk with 4 houses, the players in this game are sovereign countries trying to develop sensible climate policy, and the object of the game is to thwart a ecological disaster. As you might imagine, it’s already getting messy.

Thankfully, some new peer-reviewed research from the National Academy of Sciences may have identified a way to make this problem more approachable, potentially helping solve an intractable problem: While the mechanisms of climate change are well-researched, we often still don’t know when environmental catastrophes will occur or the price of the damage caused. This knowledge gap poses a difficult issue for policymakers: how do you solve a problem when you don’t know when it will occur or what effect it will have?

“In my judgment the best way to move forward is to cut carbon emissions substantially, at least to the Paris Accord level or preferably [significantly] lower,” Avinash Dixit, Professor of Economics at Princeton University, told Inverse in an email. “I think the best instrument is a carbon tax.”

Of course, new taxes are much easier said than done, as a recent Carbon Tax Center report assessing the feasibility of a carbon tax in the United States recently found. But Dixit’s research suggests that there may be more upside to this path than previously thought.

Why a Carbon Tax Makes Sense

In fact, stack a carbon tax against other popular policies like cap and trade, and it’s not even much of a contest, according to Professor Dixit’s model. In the cap-and-trade method, companies receive allowances for carbon emissions and can buy and sell their supply. However, history shows that the method doesn’t make a significant dent to climate change, as low carbon prices may leave companies opting to pay up instead of proactively changing their practices to avoid the charge in the first place.

“The revenues from a carbon tax will allow other taxes to be reduced or other socially useful expenditures to be increased,” Dixit explained. “That will build up a political constituency against lowering the tax.” Basically, a carbon tax can support other social endeavors and cater to a broader population beyond the environmentally-focused, hopefully building more support for the tax itself.

Why Countries Need to Collaborate to Fix Climate Change

Of course, solving global issues is never as easy as one tax. Mitigation strategies are most effective when multiple countries agree to pitch in. Not only do individual countries need to build up the political motivation within their own populations, but also countries need to agree on an international level to commit. “If one country fails to play its part, that further lowers the willingness of others to play their part, so a coalition can easily fall apart,” says Dixit. In short, grade school teachers everywhere were right when they emphasized teamwork.

Much of the previous research modeling efforts to tackle environmental catastrophes is either limited by a narrow scope of variables or very complex, making the results difficult to interpret. Research from Dixit and Timothy Besley, professor of economics and political science at The London School of Economics, draws a promising balance between the two categories. The study includes holistic set of variables and takes into account interactions across country borders — all on a single spreadsheet.

It doesn’t replace more complex studies attempting to predict the best political path to fight climate change, but it does give policymakers a place to start without being completely overwhelmed by the laundry list of paths to carbon emission reduction.

So how does the model actually work?

The model gives a value of how willing a country is to pay to combat climate change. Using Hurricane Katrina as a baseline on how costly environmental catastrophes can be, the model looks at a variety of variables, including the cumulative level of greenhouse gas in a given year, the expected GDP of a country and the cost of a potential (but unknown) technological solution to climate change issues.

At the end of the day, the research hammers home a lesson we already knew. Countries need to work together. But in today’s data-driven world, policy makers rely on the numbers to make decisions, and it’s hard to produce data about things that haven’t happened yet. Although we still can’t predict the future, Dixit and Besley’s work gives us the next best tool to guide more strategic decisions on a global scale.

More like this
Science
Feb. 1, 2023
7 Years Ago the World Agreed to Slow Down Climate Change — But a New Report Shows an Uneven Future
By Tara Yarlagadda
Science
Feb. 5, 2023
AI Is Smarter Than Ever – But Some Problems Still Stump Today’s Computers
By The Conversation and Jie Wang
Science
Jan. 25, 2023
Look: Primate relative shows how ancient animals adapted to global warming
By Jennifer Walter
LEARN SOMETHING NEW EVERY DAY.
Related Tags
Share: