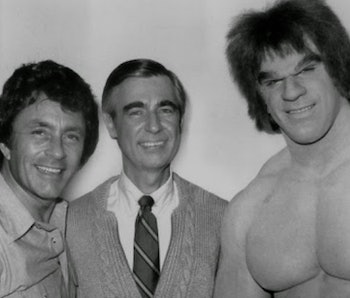 A Google Doodle video honoring the 51st anniversary of the first episode of Mister Rogers’ Neighborhood was released Friday, featuring a stop-motion Fred Rogers doing what he does best: Helping kids be their best selves. Several years after the show premiered on September 21, 1967, a special episode on superheroes aired — and became the basis of a psychological experiment helping kids get over their fear of The Incredible Hulk.

In episode 1468, which aired on February 6, 1980, Mr. Rogers leaves the Neighborhood of Make-Believe to hang out on set with Bill Bixby and Lou Ferrigno, stars of the TV show The Incredible Hulk. There, Rogers discusses how David (Bruce) Banner and the Hulk himself are still the same person and shows Ferrigno with and without his full Hulk makeup.

The idea was to explain that TV is just another type of make-believe, but as psychologists wrote in the Journal of Broadcasting & Electronic Media in 1988, Rogers also had struck on two brilliant approaches to quell kids’ fears about scary media.

To adults and older children, The Incredible Hulk TV series, which aired from 1977 to 1982, wasn’t scary at all. But to 40 percent of young kids surveyed in a study, Banner’s transformation into the Hulk in the show was emotionally upsetting, the University of Wisconsin and Purdue University scientists behind the paper write. It wasn’t just that the Hulk was physically intimidating; it’s also that young kids might have had trouble understanding that he shared an identity with kind, friendly Banner.

In the team’s attempt to identify a coping mechanism for kids in similar situation, they came across Mister Rogers’ superheroes special. Here was a man who could see the world through the eyes of a child. Maybe he could figure out how to unravel the misunderstandings that caused them so much distress.

They edited the special into two short videos showing two slightly different coping approaches. One video pieced together the parts where Mister Rogers emphasized that Banner and the Hulk were actually the same person and that both liked to help people (the “Identity Tape”). The other showed Ferrigno putting on the scary make-up that transformed him from human to Hulk and explained he was a make-believe character (the “Visual Cues” tape). The team showed these tapes to 167 kids of various age groups between the ages of three to ten, then sat them down to watch an episode of The Incredible Hulk.

After watching the tapes and the episode of the Hulk, the children answered a series of questionnaires meant to measure their emotional reaction to the episode, and their responses were compared to those of the control kids, who didn’t watch any Mister Rogers tapes.

Sure enough, as anyone who’s ever watched Fred Rogers speak might predict, the kids who watched the tapes were much less frightened by the Hulk episode than those in the control group. “The results of the experiment indicate that the intervention tapes made from portions of Mr. Rogers’ ‘superheroes’ program were generally successful in reducing children’s fear in response to the Incredible Hulk character,” the team writes.

They explain that the approach Rogers took in the “Identity Tape” — explaining Banner and Hulk are the same guy — helped kids to better understand the positive aspects of Hulk’s personality and motivations, which in turn reduced their fear. And the “Visual Cues Tape” was effective, the team reasons, because “subjects were desensitized to the visual cues associated with the Hulk’s appearance by gradually being exposed to the threatening cues as each part of the monster’s make-up was applied.”

The study results led the researchers to conclude that Rogers’ strategy of helping kids deal with difficult emotional issues by gently teaching and intervening at a very young age, and to large audiences of kids, actually works. “The effectiveness of the Mr. Rogers program is encouraging, and should motivate others associated with children’s television to proceed with similar programs,” they write.

Though the program was informed by Rogers’ own scholarship in early childhood development, his emphasis on teaching preschoolers made him, in many ways, an educator before his time. As NPR pointed out in an article about Rogers in August: “Today, increasing evidence points to the importance of early childhood education. Its impact can be felt decades down the road — in adults’ education levels, incomes, even health.”

Of course, Mister Rogers fans didn’t need a psychology experiment to appreciate how much of an impact he had on kids, whether they were scared, sad, angry, or alone. His gentle influence shaped the lives of countless American kids — and perhaps continues to do so today. And, just maybe, there are a lot more Hulk fans out there because of it.