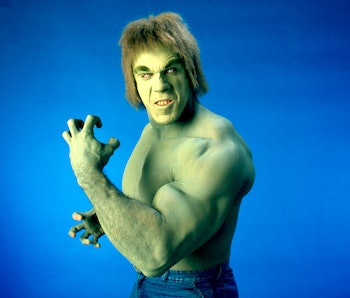 You may know Lou Ferrigno as a world-famous bodybuilder or the star of the TV series “The Incredible Hulk,” but he’s also trained as a first responder, and that’s the skillset he used to save a fan’s life on Friday at the Fanboy Expo’s Knoxville Comic Con in Tennessee.

Ted McAlister, a 36-year-old fan of the Hulk, suffered an epileptic seizure while visiting Ferrigno’s both at the convention.

Ferrigno told the Knoxville News Sentinel that he began to suspect that something was wrong as McAlister leaned forward over the table. “I thought he was trying to tell me something, and then I realized there’s something wrong with the picture. And then he started to collapse and fall backwards. I ran to grab him to make sure he wouldn’t injure himself.”

Employed as a reserve deputy sheriff in two California counties, Ferrigno knew what to do. He told Frank McAlister — Ted’s father, who was right nearby — that something was wrong, and Mr. McAlister immediately identified it as a seizure. Remaining calm, Ferrigno cleared the area, brought in medics, and helped Mr. McAlister support Ted.

The medics “responded immediately,” Frank McAlister wrote on Facebook, “but the whole time The Incredible Hulk made sure that I had everything that I needed. When Ted started to come around and started to get up the Big Man reached down his hand and assisted me as Ted stood..”

Later, when Ted recovered, Ferrigno encouraged him to come back so that they could take a picture together. Ted’s father posted it to Facebook.

“Talk about a real life Action Hero!” Mr. McAlister wrote. “This man is the real deal. It was an absolute honor to shake his hand and a greater honor to say Thank You to a gentle Giant. I pray that God will bless this man and keep him safe and out of harms way.”

Although Ferrigno acted like a superhero, he reflects humbly on his role in the events. “I’m just happy I could be of help!” he tweeted on Sunday.