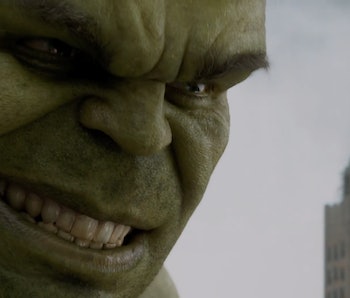 Anthony Mackie, the man who gets Captain America’s back as the Falcon, was doing an interview with Radio 1’s Ali Plumb, when he committed a nigh unforgivable sin by letting slip a previously secret plot point in the Marvel Cinematic Universe. In the actor’s exuberance to plug his upcoming appearance in Captain America: Civil War, he may have inadvertently revealed the presence of the big green guy himself.

When talking about his reasons for being excited for the film, Mackie explained, “It’s Marvel’s best movie so far. … It’s really, really good. It’s because it’s more of an acting movie than an action movie. I feel like the story is very concise and interesting, and you get to see Robert Downey Jr. and Chris Evans and Scarlett Johansson and Mark Ruffalo and everybody just do really, really good acting.”

Disregarding the fact that Anthony Mackie used the regrettable expression, “doing good acting,” the statement carries with it the explosive revelation that Bruce Banner or the Incredible Hulk (either one or both) will likely make an appearance in Civil War, when the Avengers pick sides between freedom and safety. Now, it should be noted that Anthony Mackie just went on Late Night With Seth Meyers to try and lie his way out of the dilemma:

Surprisingly, Anthony Mackie is a shit liar. You’d think an actor with his talent would be able to supply a convincing fabrication, but his performance isn’t half as good as most of his on-screen work. His claim that he wasn’t specifically talking about Civil War is straight up bogus to anyone with an IQ higher than Forrest Gump’s.

In his radio interview, he began his statement by saying Civil War was the best Marvel film to date. Then he praised that film’s talented actors. And he included Mark Ruffalo. Trying four days later to claim he was speaking generally doesn’t hold any kind of water. Let’s also consider that Ruffalo himself teased his appearance in the film about eight months ago.

So, done. Decided. Bruce Banner or the Hulk will be in Captain America: Civil War.

Of course, how exactly the green behemoth will factor in remains to be seen. Going into Civil War, the situation is pretty grim for mutants and their ilk. The government and Tony Stark are pushing for universal registration of superheroes, while a fringe resistance led by Cap is fighting for the right of anonymity. And how does the Hulk factor into this mess?

Just in case you were wondering, on the side of Freedom we have:

And, representing the side of safety we’ve got:

In the context of the MCU, too, Bruce Banner’s role would have to be nearly non-existent. Given the nature of the impending conflict, it’s likely that the largely peaceful, yet ambivalent Banner would keep out of things. After all, ideologically, Banner seems more inclined to back up Captain America. Up to this point, Banner has shown a pervasive distrust for the government; he’s also a big fan of his privacy. It’s also hard to imagine, however, Banner making the conscious decision to Hulk out with the end goal of beating the ever-loving crap out of his good buddy, Tony Stark. In other words, while it’s a sure bet the that Ruffalo will appear in Captain America: Civil War, his appearance will likely be brief.

TL;DR: Yeah, dude, Mark Ruffalo will be in Captain America: Civil War, but he won’t be in it for long, and the odds of Banner suiting up are pretty slim. Don’t worry, though, Marvel movies don’t need a CGI giant to kick loads of ass.