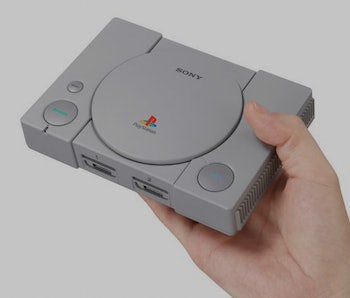 Sony took the wraps off the PlayStation Classic on Tuesday, a retro gaming console that resembles the company’s debut machine. The product packs 20 pre-loaded games in a box that’s 45 percent smaller than the original PlayStation, continuing a big trend in small nostalgia-focused consoles.

The $99.99 PlayStation Classic packs in 20 games including Final Fantasy VII, Jumping Flash, Ridge Racer Type 4, Tekken 3, and Wild Arms. The company plans to announce more games closer to its release on December 3, 2018 — a day that marks 24 years since the original PlayStation hit retailer shelves in Japan. The original console, however, didn’t launch in North America and Europe until September 1995, a sign of how global product launches have become the norm in a short space of time.

The console comes as part of a wave of nostalgia-focused products that mimic yesteryear. Nintendo has released the NES Classic and SNES Classic, both of which were snapped up in minutes, while Sega has announced a Mega Drive Mini. Even ‘90s hits like Crash Bandicoot and Spyro the Dragon have received 4K-supporting remakes for fans of the original games.

The Sony console comes with two controllers that mimic the original design. Sony has stuck with the original, stick-free design that debuted with the console, as the dual analog sticks didn’t arrive until April 1997 and the vibration-compatible DualShock launched in November of that year.

One modern update is that the controllers connect via full-size USB ports on the front instead of the older pin-based plugs, meaning you won’t be able to whip out your old controllers or plug in the four-way Multi-Tap adapter. Also new with this miniature PS: The machine also uses a virtual memory card to store progress.

On the rear, Sony has included a full-size HDMI port for easy connection to modern televisions, eschewing the need for tuning in with an RF connection or the like. There’s also a micro-USB port for powering the machine. While HDMI and USB cables come inside the box, Sony does not include an AC adapter, instead asking users to provide their own five-watt plugs for operation. The box also has a mysterious flap on the right side, which housed the expansion port on the original machines.

On top, Sony has included the full suite of three working buttons. The machine doesn’t use CD-ROMs like the original, so instead of opening the top lid, the “Open” button now switches virtual games, while the “Reset” button suspends operations.

Even with all the new features announced Tuesday, there remains a lot of unknowns about the PlayStation Classic. For one, it’s unclear whether it will offer any sort of expansion opportunities for additional games, or whether the games will feature any picture filters or higher resolutions as found in computer-based emulators.

As a small simple box for PlayStation games, though, it seems Sony is onto a winner.

More like this
Gaming
Sep. 29, 2022
21 years later, PlayStation owes everything to this forgotten classic
By Willa Rowe
Gaming
22 hours ago
Warzone Mobile release window, trailer, and the return of Verdansk
By Joseph Yaden
Gaming
22 hours ago
Everything you need to know about the Apex Legends Fight or Fright event
By Willa Rowe
Related Tags
Share: