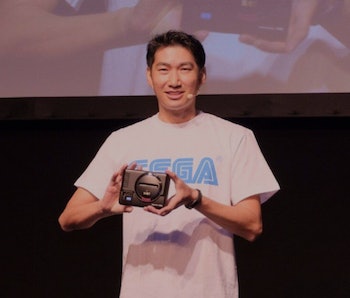 Sega is back in the hardware business, but not in the way many fans have hoped. The company announced its own mini console similar to the NES Classic and SNES Classic from Nintendo. Gamers could soon recreate their own console war between Sega and Nintendo like back in the Nineties, but on a much smaller scale.

Sega revealed a new “Mega Drive Mini” at a presentation during Sega Fes 2018 in Tokyo on Friday. Shaped like a small Mega Drive, or Genesis in the U.S., the mini console will include a yet to be announced number of classic games. The release of the mini console in 2018 marks the 30th anniversary of the Mega Drive release in Japan.

The Mega Drive was Sega’s 16-bit console released first in Japan in 1988. It came out years before Nintendo’s Super Famicom, or Super NES in the U.S., and was the first video game console to take a chunk of market share from the Mario company. If Sega wants to repeat that feat in the “mini” console war against the NES Classic and SNES Classic, it will need to offer as many iconic games, if not more, than both mini consoles. It will also need more modern features such as online play.

There are five ways Sega can repeat that feat again in this new mini console war.

The NES Classic and SNES Classic had a price tag of $60 and $80. If the Mega Drive Mini came out for an even lower price, it can be even more attractive for gamers who want more nostalgic goodness.

Both mini consoles from Nintendo came out in the fall of their respective years before Black Friday. Sega would need to release the Mega Drive Mini at around the same time, but it needs to find a time where there is not a major video game planned for release. This October is a horrible month to release since the next Call of Duty and the much-anticipated Red Dead Redemption 2 are both scheduled for that month. That means September could work best or November, right before Christmas shopping kicks into gear.

The NES Classic came with 30 games, while the SNES Classic had 21 games. Sega can outdo them both with more games, but also more of the Sega games that are a little harder to acquire. For example, Sonic the Hedgehog 3 will likely not come out for the Mega Drive Mini due to the music Michael Jackson made for it, but that’s one of those games that fans love. Also, the company could throw in some classic games from the Sega CD. Gamers needed a Sega Genesis to play Sega CD games, and it takes a minimal amount of power to emulate those games.

The Sega Genesis had important third-party games for it. EA made several iconic sports games for the 16-bit console such as John Madden Football, Lakers vs. Celtics and the NBA Playoffs, and Mutant League Football. Earthworm Jim, Castlevania: Bloodlines, and Gunstar Heroes were other beloved third-party games on the Genesis. Nintendo was able to get some games it didn’t develop on both the NES and SNES Classic, but Sega should try to get even more.

Even though many older gamers remember playing their Sega Genesis on the couch with friends, they have grown up, so having friends over to play games is not as feasible. Online play for games such as Golden Axe or Streets of Rage could be a big selling point for the Mega Drive Mini. The option for owners to customize the console or even switch out games at will via the internet could be another big plus.

The Mega Drive Mini will release first in Japan. It will then release later in 2018 to the U.S. and other regions.