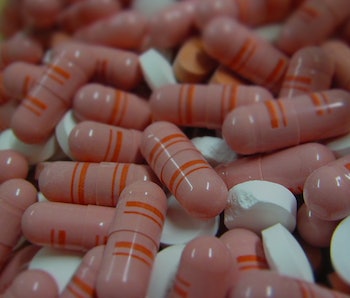 Gut health is having a bit of a moment. Research on the microbiome shows that the trillions of bacteria naturally colonizing our gastrointestinal tracts exist in a delicate balance that’s tightly linked to our physical health. Meanwhile, the rising popularity of fermented foods containing live bacteria have made it easy for people to feel like they’re keeping their guts healthy. Probiotics — foods and drugs containing “good” bacteria and yeasts — have been widely adopted as a popular panacea for many ailments, but a pair of new studies in Cell warns we shouldn’t be too hasty about taking them.

Probiotics are widely thought to help colonize the gut with healthy microbes by supplying them externally. They’re often recommended after a round of antibiotics, which clear out some of the natural flora in the gut. The problem with this strategy, the two new papers show, is that everyone has a different balance of bacterial strains in their digestive system, and so a single pill can’t be universally helpful.

“In general I believe that our results strongly suggest that we need to revert from the currently utilized one size fits all probiotic use scheme, in which probiotics are given universally and indiscriminately, to a probiotic approach which is personally tailored, measurement and science-based and efficacious at the individualized level,” senior author Eran Elinav, Ph.D., an immunologist at the Weizmann Institute of Science in Israel, tells Inverse. “Until then, I would be careful in my choices.”

In the first study, Elinav and his colleagues looked to determine whether the bacteria and yeast in a standard 11-strain probiotic pill (representing the “four most widely used bacterial families”) actually had any effect on the gut. Through their study on 25 volunteers, they discovered that people who took probiotics could divided into two subgroups: people whose bodies adopted the new pill-borne bacteria (persisters), and people who rejected them (resistors). Some people, depending on the natural bacteria in their gut, are naturally more permissive of new probiotics than others.

“Probiotics gut colonization is highly personalized, with only ‘permissive’ individuals allowing probiotics to colonize their guts and impact their indigenous microbiome and host gene expression profile,” says Elinav. The team was even able to tell, based on each person’s natural microbiome alone, whether they would be a persister or a resistor.

One of the big differences between this study and previous research on probiotics is that it did not rely on human poop. Many studies consider the bacteria in fecal matter an accurate reflection of the bacteria in the gut, but Elinav and his team, who sampled participant bacteria using upper gastrointestinal endoscopies and colonoscopies, showed that poop microbiota only show one side of the story. A lot of bacteria come out in stool; but when it comes to probiotics, it’s the bacteria in the gut that matter.

“Stool,” he says, “only partially correlates with gut microbiome composition and function.” This discovery, in turn, casts doubt on a lot of the existing research on probiotics and gut health.

In the second study, Elinav and his colleagues investigated whether it’s actually helpful to take probiotics after a round of antibiotics. The conventional thinking is that probiotics will help supplement some of the natural flora that are cleared out by antibiotics, but the team’s experiments showed a slightly different scenario. After 21 participants received antibiotics for a week, each person got one of three treatments: either they received a probiotic pill, no treatment, or a fecal transplant pill (taken from their own gut before the round of antibiotics).

Examining each person’s gut bacteria after the “treatment” round showed that probiotics did colonize cleared-out guts — but to such a degree that it prevented the body’s natural bacteria from gaining a foothold.

“After antibiotics, probiotics significantly inhibit the reconstitution of the gut microbiome and host gut gene expression profiles towards their pre antibiotic naive state,” says Elinav. The people who didn’t receive treatment eventually recovered their natural microbe balance. But it’s the people who got a poop transplant from their own gut (an autologous fecal microbiome transplant, or aFMT) that offer a glimpse of what probiotic treatment might look like in the future.

“In contrast, replenishment with a person’s own microbiome (collected prior to antibiotic exposure) results in full gut recovery within days,” says Elinav.

The role of probiotics in the field of gut health is controversial, says Elinav, because the data that’s been collected thus far is inconsistent. “Research on probiotics both in healthy humans and in disease conditions is highly controversial, with studies showing highly conflicting results,” he says. “Given this lack of reproducible results, the FDA and European regulatory authorities have so far declined to approve probiotics for medical indications.”

Now that Elinav’s team has identified some discrepancies in the way scientists conduct probiotics studies (less poop; more invasive procedures), we may be on track to finally learning more about what probiotics really can and can’t do. In the meantime, there’s no guarantee that taking mass-produced probiotics is actually any good for you, and Elinav’s work suggests that doing so might even be detrimental after antibiotics. Their analysis, however, only tested one preparation of probiotics, so it remains to be seen how other types compare. Whatever the case, it looks as though the future of probiotics will be personalized.

“There could be other effects with other probiotics,” says Elinav, “but it is more likely that certain strains would be fit to certain individuals at certain clinical contexts, as we show in our studies.”