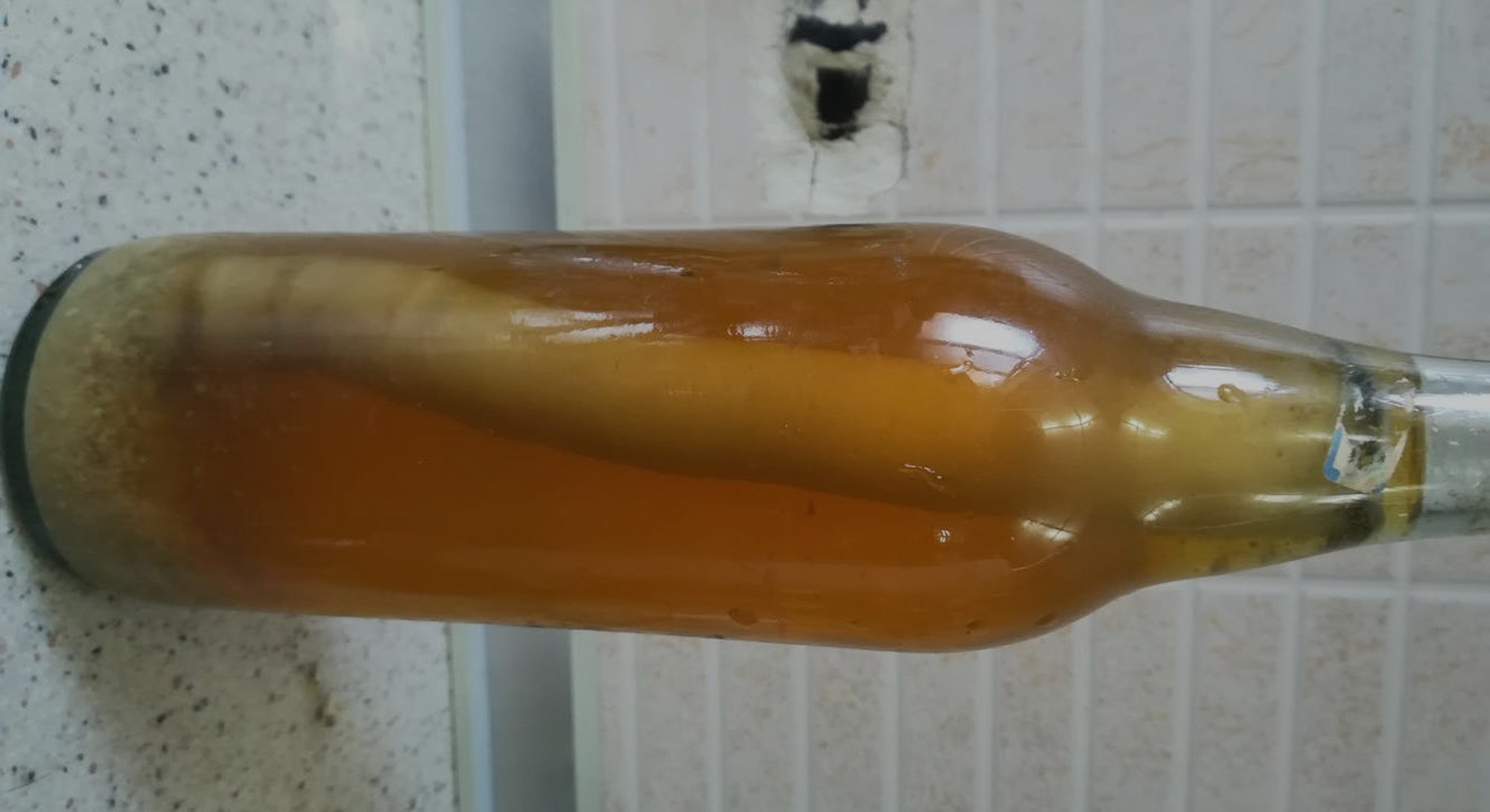 A new god has risen, and his name is Mr. Yeasty. But he’s probably not 100 percent yeast.

In less than a week, Mr. Yeasty went from a forgotten scrap of kitchen trash to a full-on viral deity. On July 14, redditor adun-d posted a photograph in the r/WTF subreddit that looked like a massive pale worm in a bottle of iced tea. The caption read: “Something is growing inside a bottle of natural orange juice I abandoned inside a cabinet for over a year.”

The thread took off, and as of this article’s publication, it has over 38,000 upvotes and a near-endless string of replies, much of it speculation about what Mr. Yeasty actually is. Riding the wave of enthusiasm, adun-d named the object Thanos, after the Marvel villain, though he’s since changed the name to Mr. Yeasty. The day after the initial post, adun-d, whose real name is Ehsan, posted a video of himself breaking open the bottle to free the blob. Now, he moderates the 16,000-subscriber r/MrYeasty subreddit, devoted to the mystery and the madness.

In conversations with Ehsan and microbiology experts, Inverse attempted to get to the bottom of Mr. Yeasty’s origins.

“She screamed when she first saw him!”

Ehsan is a homebrewer, which may sound like a run-of-the-mill hobby for many people, but in his native Iran, it’s a little more badass than usual. “Although alcohol production and consumption is criminally prohibited in Iran, like everything that is banned here there is a vibrant society and culture of brewing and alcohol only among the people disconnected from the government,” Ehsan tells Inverse.

Mr. Yeasty’s story begins about a year ago, when Ehsan made a bottle of juice from fresh-squeezed bitter oranges that he handpicked in northern Iran to use as a condiment. Around the same time, he also bought some juice from the locals, but he doesn’t remember whether Mr. Yeasty grew in the one he made or in the one he purchased. Either way, the now-infamous bottle never made it to the dinner table. It was forgotten until about four months ago, when Ehsan heard his wife discover it.

“She screamed when she first saw him!” says Ehsan, who was delighted by the discovery. “She wanted to dispose of him, but I told her I must show him to the world.”

But as with so many things, life gets in the way, and Ehsan forgot about the bottle until his wife reminded him that he needed to take care of “that abomination in the kitchen cupboard.”

Hypothesis 1: Mr. Yeasty Is a Yeast

Paul Rowley, Ph.D., an assistant professor of biological sciences at the University of Idaho who studies yeasts and the viruses that infect them has some ideas about what that “abomination” might be. Ehsan provided some details: Mr. Yeasty doesn’t have much of a smell, he’s relatively firm with a leathery exterior, and the bottle didn’t release any pressure when it was opened. Until we look at a sample of Mr. Yeasty under a microscope, we can’t know for sure what he is, but these details give us a good place to start.

Unfortunately for Mr. Yeasty, he might soon have to face a full-on identity crisis.

“I’m going to say that it is probably not a yeast, specifically,” Rowley tells Inverse. “It’s more likely a fungus, but that’s speculation. Without looking at it under the microscope, it’s really hard to tell what it is.”

Most commercially available drinks with yeast in them, like bottle-conditioned ales, don’t look like this, says Rowley. In those cases, the yeast, usually some species from the genus Saccharomyces, takes the form of a layer of fine sediment at the bottom of the bottle. This is why most such beverages instruct you to pour them slowly and evenly so as not to disturb the yeast floating at the bottom. But that’s not at all what Mr. Yeasty looks like.

“They don’t normally form large, stable structures like the one shown in the video,” he says. “It looked very solid, so I don’t know what it would be. I’m guessing it would be a microorganism for sure.”

Hypothesis 2: Mr. Yeasty Is a SCOBY

That “something else” could be a symbiotic colony of bacteria and yeast, which kombucha fans may know as a SCOBY. Scientists like Chris Ellison, Ph.D., an assistant professor of genetics at Rutgers University, know it as a “cellulosic pellicle.”

“The bacteria that like to grow in kombucha (mostly Gluconacetobacter) are able to produce cellulose, which is the same compound that is present in plant cell walls that gives structure/support to the plant,” Ellison tells Inverse. He explains that the bacteria produce cellulose, which makes a mat that floats at the top of the liquid. “Within this mat, lots of other species of bacteria and yeast are able to grow, and as they grow, they add layer after layer to the pellicle.”

This could also explain the strange shape that Mr. Yeasty took.

“Because of the shape of the bottle, the pellicle started out as a thin mat with the same diameter as the mouth of the bottle,” says Ellison. “The actively growing bacteria stay at the top of the mat where there is more oxygen. As they add layers to the pellicle, the previous layer is submerged down into the bottle which would explain why it now looks like a tube.”

However murky his origins may be, we can be sure that Mr. Yeasty didn’t just arise from the juice spontaneously. Life, however tiny or incomprehensible, must start somewhere. For his part, Rowley suspects that Ehsan didn’t properly sterilize the bottles, which Ehsan confirms.

“That bottle was not sterilized in any way lol, homemade by locals or myself,” he says. “I usually see some sediment in the bottom of these bottles, but nothing like this.”

The general consensus among members of r/whatisthisthing is more in line with Ellison’s SCOBY theory, but as Rowley points out, none of these hypotheses can be confirmed without scientific instruments.

“If he really wants to know what it is, he’ll have to go and have a look at it under a microscope. If the structure is made of threadlike appendages, then it’ll probably be more like a filamentous fungus, but it could be something else,” he says. “I’d encourage him to find somebody with a microscope.”

Given the dedication Ehsan has showed toward Mr. Yeasty, it seems likely that doing so is a possibility. We will update this article if we get that opportunity.