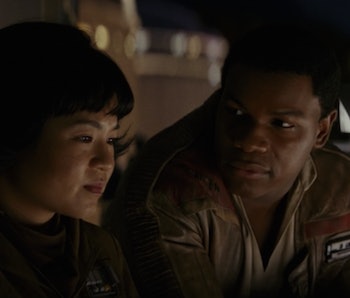 After months away from social media after being attacked by Star Wars fans, Last Jedi star Kelly Marie Tran has seemingly decided to start going by her birth name.

In an emotional New York Times essay about her life as a woman of color, Kelly Marie Tran ends her piece by revealing her real Vietnamese name: Loan, pronounced “Lu-awn.”

We have reached out to Tran’s representatives to confirm if she is indeed changing her stage name, and we’ll update when we hear back.

“You might know me as Kelly,” reads the closing lines of her Times essay. “I am the first woman of color to have a leading role in a Star Wars movie. I am the first Asian woman to appear on the cover of Vanity Fair.

“My real name is Loan,” she adds. “And I am just getting started.”

The significance of Tran revealing, and possibly going by, her Vietnamese name cannot be overstated. Simply put, it’s an act of defiance for a person of color to go by their “unpronounceable” name instead of an adopted Anglo name — aka “normal” names — as Tran explains in her essay.

While nearly all actors and entertainers adopt “normal” names — Natalie Portman’s real name is Neta-Lee Hershlag, and Fred Astaire was actually Frederick Austerlitz — there’s an extra layer for Tran, a Vietnamese-American woman who was the target of bigoted harassment over her appearance in The Last Jedi.

Earlier this year, Tran was chased off social media by fans of Disney’s Star Wars franchise who so strongly disliked her appearance in the film that they bombarded the social profiles of the film’s actors and its director, Rian Johnson. They disapproved of Tran’s character, Rose Tico, but the vitriol was focused on mocking her weight and race. On Wookiepedia, a fan-run Star Wars encyclopedia, a user edited Rose Tico’s entry with racial slurs.

While Johnson and others dealt with the usual crop of trolls, Tran uniquely dealt with racism and sexism from (mostly) white male fans. A known Facebook page with the actual name “Down With Disney’s Treatment of Franchises and Its Fanboys,” a group that expressed declarations to “Bring back the Straight White Male Hero” to Star Wars, claimed responsibility for harassing Tran.

“It wasn’t their words, it’s that I started to believe them,” begins Tran’s essay in the Times. “Their words seemed to confirm what growing up as a woman and a person of color already taught me: that I belonged in margins and spaces, valid only as a minor character in their lives and stories.”

Throughout her essay, Tran recalls little moments of seemingly harmless social interactions that harshly reminded her that, simply because of her ethnicity, she is the “other.”

“It reinforced within me rules that were written before I was born, rules that made my parents deem it necessary to abandon their real names and adopt American ones — Tony and Kay — so it was easier for others to pronounce,” Tran writes, “a literal erasure of culture that still has me aching to the core.”

Tran’s entire essay is a necessary read, especially because it isn’t unique. Identity erasure in the effort to assimilate is a colossal, and quiet, struggle for all immigrants and peopled who have been “othered” by society because of their skin color or culture, not just Asian and Asian-Americans.

In using her unique position as a lead character in one of the most popular film sagas of all time, Tran is finally being the most important thing she can be: Herself.