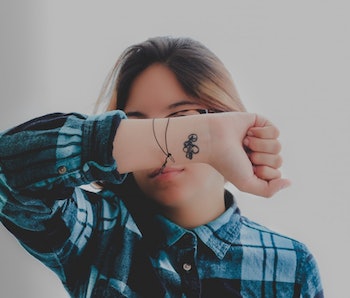 The phrase “Hey mom, I want to get a tattoo” is enough to strike fear into the hearts of parents and teens alike. But authors of a national poll by the C.S. Mott Children’s Hospital at the University of Michigan think they’ve found a way to help both sides take that very tense conversation down a notch: by revealing statistics that explain why American parents don’t want their kids getting inked.

Out of 1,018 parents involved in the survey-based study, which asked whether they would consider letting their teen get a tattoo, 78 percent said “absolutely not.” But establishing that unsurprising fact was not the point of the study, co-author Dr. Gary Freed tells Inverse. He explains that his survey results fill the void that opens up between parents and teens when they have a conversation about tattoos, and families that use them as discussion points might be better able to push past the “Why not?” stage and have more meaningful discussions about self-expression, medical safety, and the repercussions of living with a decision made at age 17.

“Tattoos are becoming more common, but there’s very limited information regarding the ways that parents view tattoos,” he says. “If it really does its job, the poll is to help communication. What are those concerns? And help open up a dialogue between parents and their children.”

To this end, Freed’s poll highlights three major issues with tattoos that parents bring up time and time again. Of the participants, 68 percent mentioned that future regret was the leading reason they were nervous about their teens getting tattoos, and 53 percent mentioned potential medical complications as a compelling deterrent. Many were also worried that employers might stereotype their kinds if they had visible tattoos, with 50 percent of parents saying they were “very concerned” that it could impact job prospects.

Freed thinks it’s particularly interesting that two-thirds of parents said they see tattoos as a form of self-expression. Like any other form of self-expression, tattoos should be discussed as a family while maintaining respect for personal autonomy on both sides, he says. Alongside the survey results, his team has also released a guide for helping teens and parents have these conversations.

“I would say that a parent could ask their child, ‘Have you ever thought about getting a tattoo? What are some of your thoughts?’” he says. “Parents need to be clear about their perspective and have an open relationship with their kids. That open communication doesn’t spontaneously happen when a child turns 16 or 17.”