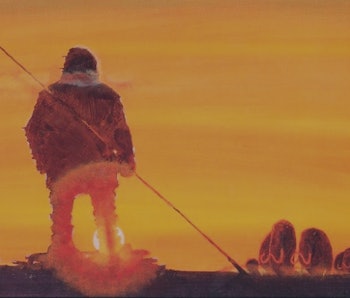 Thousands of years ago, humans in Eurasia were cut off from the Americas by ice. But when the ice began to melt and humans crossed the Bering Strait from Siberia, the fate of humanity changed, and the Americas were transformed. Still, one major problem at the heart of this great migration has the scientists involved in a new Science Advances study locked in a stalemate. Who got there first, and how did they get there?

There are two competing premises: the ice-free corridor route and the North Pacific Coast route. The former, which postulates that humans traveled along an ice-free corridor that began in Alaska and then extended into the high plains of North America through a land-locked path, was seen as the only option for decades. But more recently, the coastal route theory, which posits that the first Americans migrated down along the Pacific Rim shorelines from the Bering Strait to South America, has gained traction. Some scientists even argue that it renders the old theory moot.

In the new study, an international team of researchers acknowledges the existence of an intellectual standstill. The two competing theories for how humans populated the Americas, are, for now, equally viable, they argue.

“What we say is that the history of human dispersal into and through the Americas is more complex than people like to conclude today,” explains co-author and University of California, Santa Cruz ancient DNA specialist Lars Fehren-Schmitz, Ph.D., to Inverse. “We think that we should wait and gather more evidence, especially in regions of critical importance for the different scenarios, before we simply say one model is the ‘winner.’”

The stalemate is remarkable because these theories seemed to present different timelines when they were first presented. The ice-free, land-locked corridor theory was at first tied to the settlements of the Clovis people, who lived across North America about 13,000 years ago — hence, it was known as the “Clovis first” theory. Meanwhile, the the coastal route suggests that people may have migrated south between 20,000 and 15,000 years ago.

But more recently, new evidence, like ancient human feces found in Oregon and stone tools found in Texas, showed that people were in the Americas 16,000 years ago, suggesting the “Clovis first” theory is wrong. Still, it doesn’t rule out the idea that people traveled through the ice-free corridor.

Evidence supporting both the ice-free corridor theory and the coastal route theory poses a bit of a conundrum, but Fehren-Schmitz says there’s at least one way to settle the debate: We must accept that people voyaged into the Americas along multiple routes.

“If people eventually dispersed into the continent from Beringia, it is very likely that they simply did not all run at once when the first possibility opened up,” he says. “Some might have directly followed the coastline, while others that remained in Beringia took the inland route 500 or 1,000 years later.”

Fehren-Schmitz is a “big supporter of the coastal route,” but the work of other scientists led her and her co-authors to acknowledge in the new paper that coastal travel is a “prematurely narrow interpretation of current evidence.” The study’s primary author, University of Alaska, Fairbanks anthropology professor Ben Potter, Ph.D., explains to Inverse that we can’t definitively side with the coastal route theory because we lack data on the northern part of that route. Furthermore, if the coastal route theory is correct, he wonders, then how could a culture accustomed to hunting mammoth and bison transition so quickly into a maritime society? He concludes that there’s a “lack of evidence were we should expect to see evidence” and that more research is necessary.

“We make it clear that we cannot rule out either possibility,” says Potter. “Our criticisms are intended to provide issues that need to be resolved in future iterations of the coastal migration hypothesis. We conceded that even with these issues, a coastal route remains a viable hypothesis. I even suspect both routes may have been used quite early, but that remains speculation.”

But one of the reasons there appears to be a “lack of evidence” for the coastal theory is because it’s a new area of study, notes University of Oregon professor Jon Erlandson, Ph.D. Erlandson is a proponent of the “kelp highway” hypothesis, which some scientists consider a sub-theory within the coastal migration theory. He tells Inverse that archaeologists have extensively searched the 1,500 miles of the ice-free corridor for pre-Clovis evidence, but they’ve just barely begun searching for similar sites along the Pacific Coast.

Fehren-Schmitz isn’t a fan of the kelp hypothesis because he believes that it “more or less avoids the possibility that people inhabited terrestrial Beringia” and that there’s enough evidence to prove people lived there. But that doesn’t mean we have to throw out that theory. In his mind, just because one model fits an observation doesn’t mean it’s the only model that can explain things. Science, he concludes, “should be based on verification and falsification.”

More like this
Science
5.7.2022 11:00 AM
New technology could reveal how ancient humans lived 300,000 years ago
By Paul Pettitt, Alistair Pike and The Conversation
Entertainment
14 minutes ago
The stars of 'Men' unpack its mysterious ancient symbolism
By Jenni Miller
Science
5.15.2022 7:00 PM
200 years ago, this terror of the Amazon inspired the world’s first batteries
By Timothy J. Jorgensen and The Conversation
Related Tags
Share: