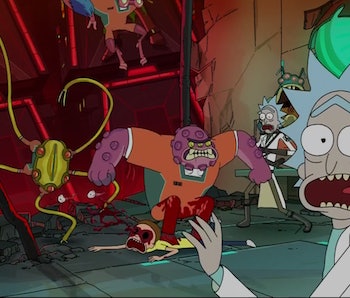 Over the years that Rick and Morty has been on, Morty and especially Rick have made a ton of enemies across the multiverse. So there’d be no story more epic than a culminating Season 4 arc that features a rogue’s gallery of the series’s greatest villains. Despite the fact that the show often introduces interesting new characters only to forget about them for years at a time, Rick and Morty should absolutely build a team of bad guys at some point during Season 4.

Many of these characters and plotlines are already long overdue for a revisit to begin with, but it would be truly incredible if they came together. An embittered son, an assassin’s widow, the devil himself, the king of all vampires, a celestial superhero, a flying Terminator, and a dark version of a friendly face all make this list.

From niche to totally obvious, here are 7 of the best villains from Rick and Morty that should totally team up in Season 4:

Even though I consider “Raising Gazorpazorp” to be perhaps the worst Rick and Morty episode ever, the fact that Morty has an alien child out there to this day seems like a storytelling opportunity for a later episode.

After Morty copulated with a Gazorpian sex doll, it used his DNA to make a monstrous, powerful, four-armed male Gazorpian whom he named Morty Jr. because he lacks creativity. Since Morty’s parental role models are all kind of terrible, he was quick to emotionally damage his own child. We learn in the post-credits scene that Morty Jr. went on to become a brilliant, best-selling author who harbors a lot of resentment for his father.

Morty Jr. is still out there in Morty’s current reality, so what if he’s plotting against his own father?

If there’s somebody out there with an even more serious grudge against Morty, then it’s the widow of cheery Gromflomite assassin Krombopulos Michael. We first met K-Michael in “Mortynight Run” when he bought an antimatter gun from Rick so he could kill a sentient being made of gas that Morty names Fart. By the episode’s end, Morty tries to prevent the assassination but accidentally runs Michael over with Rick’s car.

While Michael is still alive, he looks at a picture inside a heart-shaped locket (featured above) just before he goes on a brief killing spree. One particular comic storyline from Oni Press explains that this is Michael’s wife Amy. She takes up her dead husband’s weapons and vows revenge.

As much as we’d also love an alternate reality version of Krombopulos Michael, it would be just as awesome to see Rick and Morty have to content with Krombopulos Amy.

In “Something Ricked This Way Comes,” Summer gets a summer job working for the Devil. Yes, the actual Devil.

He goes by Mr. Lucius Needful and owns a pawn shop full of cursed objects, like a skin cream that makes women prettier but also blinds them. For Mr. Goldenfold it’s an aftershave that attracts women but makes him impotent. Rick foils the Devil’s business plan by removing the curses with science, and after Needful enters the tech world with n33dful.com, he “Zuckerbergs” Summer by firing her. The episode ends in ridiculous fashion, with Rick and Summer lifting weights and taking a bunch of steroids to get buff and beat the crap out of the Devil.

It’s one of the weirdest endings to any Rick and Morty episode ever, but it definitely makes Rick an enemy of the Devil. And that can’t be a good thing, right?

Anyone can easily forget that the whole reason Rick became Tiny Rick in “Big Trouble In Little Sanchez” was to root out a vampire problem at Morty and Summer’s school. The three of them dispatched a “Coach Feratu” offscreen, and in the episode’s post-credits scene, the king of all vampires — whom we might as well just call Nosferatu — receives news of his death.

Granted, this vampire seems more upset about the fact that Coach Feratu was dumb enough to call himself that while pretending to be a human, but if vampires in Rick and Morty are anything like vampires in other media, then it’s possible that he might one day try to neutralize the threat presented by Summer, Morty, and Rick.

One of Season 3’s best episodes satirized our obsession with superheroes in the best way possible. In “Vindicators 3: The Return of Worldender,” Morty and Rick were called to help a group of intergalactic superheroes help stop a horrible villain. But Rick hated superheroes — and Morty’s worship of them — so much that he got blackout drunk and set enough traps to kill just about all of them. Supernova is the only surviving Vindicator. She’s also the most powerful, capable of flight, along with energy and matter manipulation.

Enraged by Rick’s actions, Supernova eventually becomes unhinged and vows revenge. There’s no telling if or when Supernova might return to the show, but, considering her powers, she’s one of the greatest threats out there.

The Rick and Morty comics offered an alternative story that introduced a version of the Vindicators from an alternate reality, and while the same plot likely won’t make its way to the show, that base idea remains solid.

One of the longest-running and most monumental twists in Rick and Morty history was Birdperson’s death during “The Wedding Squanchers” in 2015 and his consequential resurrection as “Phoenixperson” at the end of “The Rickshank Rickdemption” when it aired April 1, 2017.

Birdperson was Rick’s closest friend and former comrade in arms, but he was betrayed by his wife Tammy (actually a Federation spy) at their wedding. The Season 3 premiere post-credits scene showed that Tammy had Federation scientists turn Birdperson into a Terminator-esque cyborg. The scene almost felt like it was establishing what might’ve been a season-long arc. But on Rick and Morty it turned out to be just another bit.

Still, Phoenixperson and Tammy are still out there, and if she went through such great lengths orchestrating a fake marriage just to get a chance at killing Rick, there’s no telling what she’ll be capable of in the future. Rest assured that these two come as a pair.

The Lex Luthor of Rick and Morty is the mastermind commonly referred to as Evil Morty, a character first introduced in Season 1’s “Close Rick-Counters of the Rick Kind” but only the viewer knew him to be a villain. In Season 3’s penultimate episode, “The Ricklantis Mixup,” this alternate-reality Morty manipulated his way into becoming the first democratically elected President of the Citadel that houses tons of Ricks and Mortys from across the multiverse. After he murdered anyone on the shadow council of Ricks that opposed him, he essentially became a ruthless dictator.

The origins, motives, and and real intentions of this character remain largely unknown. The penultimate episode of Season 3 made it seem like this villain would go on to be a major series antagonist, but given that Rick and Morty sidelined Phoenixperson for nine full episodes already, who knows how long it will take before we see Evil Morty again?

All things considered, however, if there’s one character that can be the brilliant mastermind to inspire some kind of epic, supervillain team-up to combat Rick Sanchez, it’s Evil Morty.

Check out a video of me breaking down a popular Evil Morty theory: