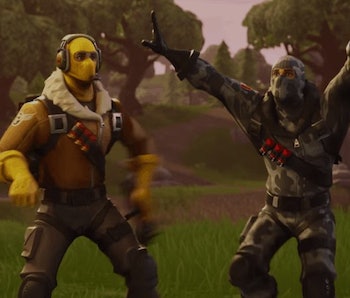 The Week 10 Challenges went live last Thursday, and a few them are a little trickier than others. There are four things to keep in mind for reaching the Season 4 Battle Pass Tier 100 to unlock the last skin.

Epic Games got a little creative with this challenge. For most weeks, the task is to find a designated location between various structures, but they’re listed in the challenge title. This week’s mission required some thinking as the locations were the name of three fake movies: White Lion, The Orange Crusher, and TV Dreams. The White Lion is a statue outside of the new soccer stadium, The Orange Crusher is in Junk Junction, and TV Dreams is a movie set northeast of Junk Junction. Players will need to visit a spot south of a set of buildings between the soccer stadium and Junk Junction to find the Battle Star.

For veteran players, this challenge isn’t that difficult as in the later part of a match, players will have a “build off,” which can sometimes require destroying the other player’s builds. On the other hand, those players who don’t make it that far in the match can still find plenty of structures to destroy in a 50v50 match, which is still available. Start a match and stay close to the other players on your team. Once the match starts heating up between teams, the opponents will usually create large structures to defend themselves meaning players can throw grenades or just fire away to accumulate those structure damage numbers.

Again, 50v50 mode is here to save the day. Chest and ammo boxes are easy enough to find, but not supply boxes. These are meant for late in the match and in solo games, these are prime targets to get sniped by other players. Join a 50v50 match, hang back a bit when the storm closes in and keep an eye out for the supply boxes coming down from the sky. Since there are so many players, it’s easy to be overlooked and more importantly, supply boxes will come down in larger numbers during the big match.

There’s no easy way to do this challenge. Just keep on playing and shoot to fly through three rings in each match. Playing seven games of Fortnite is not that much of a chore.

The rest of the Week 10 Challenges are the standard fare involving eliminating opponents in certain locations and finding chests. As mentioned before, playing in 50v50 mode can really help speed through these challenges as there are fewer players looking to take you down in the mode and plenty of teammates willing to revive you.