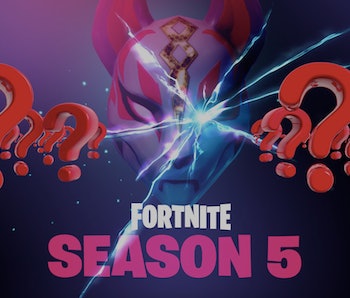 Based on that cryptic first Fortnite: Battle Royale Season 5 teaser featuring what looks like an ancient cat mask, video game developer Epic Games really wants players to think the upcoming season is all about time travel. At least, that’s our best theory at the moment.

On Monday, the company shared a new image featuring what looks like some kind of cat head — perhaps a mask — with one of those space-time rift cracks arcing out of its left eye. In recent days, one of these rifts “transported” the giant Durr Burger sign in the game to the real-world desert of California. All things considered, these tears seem to indicate fractures in space-time, meaning they either cause time travel or forge a bridge between dimensions.

So what does that mean for a godlike cat mask?

The two most prominent and best theories assume this mask references either the Egyptian goddess Bastet (or Bast) or a Japanese kitsune fox mask typically used for Kabuki dramatic dance performances. Either way, this is almost certainly a new outfit for Season 5, considering that’s exactly what Epic Games teased at this point in Season 4.

Considering all the theories about time travel and the island transforming into a desert, an Egyptian mask seems like the most likely explanation, so the mask is probably modeled after the Egyptian cat goddess. The gold symbol on the forehead is even vaguely reminiscent of the hieroglyph for “twisted flax,” with a slight variation.

Ancient Egyptians really liked cats, and they showed this through all kinds of Bastet iconography. Generally speaking, she’s the goddess of warfare and protection, which seems to fit with a battle royale game well enough.

Many Bastet masks and figures also feature a sistrum musical instrument. Some more modern interpretations, like the one featured below by b3designsllc on Deviant Art, look sort of like the symbol on the Fortnite cat.

Alternatively, this Fortnite mask could connect to the kitsune masks in Japanese yōkai folklore, which involves supernatural monsters and spirits. There’s less evidence to support this theory for Fortnite: Battle Royale’s Season 5 based on what we know so far, but it’s entirely possible that the new season could fuse together or incorporate multiple cultures.

Also consider that the Fortnite island does already have a huge wooden fox, but there are zero mentions or instances of cats of any kind on the island.

The Fortnite mask, to me, does resemble a cat far more than it does a fox, but there are some fox faces in Japanese culture that look more catlike than you might expect.

Here’s a kitsune yōkai from Deviant Art user lienskullova, which does bear a striking resemblance to the Fortnite mask, especially with its red markings.

A fun third theory connects this new teaser image to the 2001 film Donnie Darko, which also involves both time travel and a creature mask with a glowing left eye.

All things considered, the best theory likely goes to redditor realaidanhylen, who, in a Reddit post, posits that this god or goddess is a unique creation of Epic Games in much the same way that the company designed its own superheroes inspired by ones from Marvel and DC Comics.

Epic Games also released another teaser on Tuesday featuring what looks like a traditional Viking axe — one that will no doubt become a pickaxe in Season 5. So it’s probable that all (or none) of these theories are correct because Epic Games will probably remain as creative as ever.