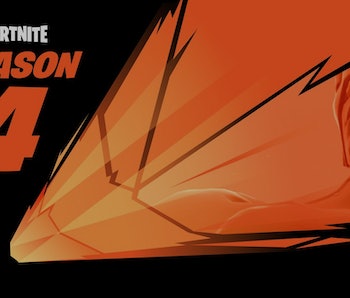 Every day, the meteor situation in Fortnite: Battle Royale gets worse and worse, and with the conclusion to Season 3 a mere few days away, new details are beginning to emerge about what might happen for Season 4. An extreme meteor strike is almost definitely imminent — one that’ll probably destroy Tilted Towers — but a hugely significant addition could also be coming: aliens.

Developer Epic Games has been teasing the meteor for weeks now, but new imagery emerged on Thursday that could be teasing something else. Specifically, there’s a Season 4 insignia shaped like a meteor streaking downward, and in the background is some humanoid face that definitely doesn’t look human. In-game, the New Updates pop-up teases Season 4 with that same insignia with a teaser that says “Brace For Impact.” If this alien figure is directly related to the impending meteor impact, then maybe it’s not a meteor at all. Maybe it’s an alien spacecraft that’s about to crash into the map.

There’s plenty of other evidence to support this theory as well. Earlier this week, tons of TVs popped up around the Fortnite: Battle Royale map that all had the same emergency broadcast featuring the colorful llama that’ll look familiar to players. Much like the mysterious message encoded in the rumblings that occurred when players looked directly at the meteor, this emergency message also hid a secret message. According to Fortnite Insider the Morse code from the message translates to “They don’t want us to k…”

Almost everyone assumes the cutoff word is “know,” so is it that the government doesn’t want “us” to “know” about aliens? Or that the aliens don’t want us to know they’re coming? If this player-vs.-player battle royale gaming experience integrates aliens, then what if it’s a full-scale invasion in which players have to fight not only each other but also aliens? It could offer a new game mode similar to what you get in DayZ.

Smaller meteorites began striking the map on Thursday, and if the science of the Fortnite universe is anything like our own, then a single large meteor would go through fragmentation as it entered the atmosphere, losing about 50 to 60 percent of its mass. Those smaller meteorites are probably pieces of something much larger.

For all we know, that much larger thing could very well be an alien spacecraft and we’re on the verge of an alien invasion. We’re bound to find out more in the coming days when Season 3 ends on April 30 and Season 4 starts soon after.