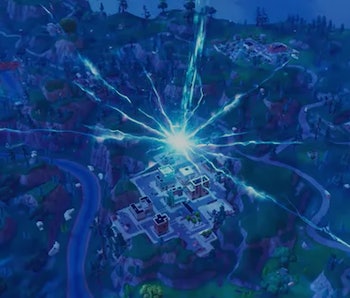 We’re just a week away from the start of Fortnite Season 5 and it looks like developer Epic Games could be planning something big to kick off the new season of play. We already experienced the rocket launch and the subsequent rifts that popped up all over the island to destroy various landmarks. Now one new theory explains what this might all mean for the Fortnite map in Season 5, and it makes a lot of sense.

After the first rift showed up like a giant blue crack in the sky, various smaller rifts keep popping up across the Fortnite map. Recently, one appeared over Tomato Town, eventually destroying the area’s iconic tomato-shaped mascot.

Well, “destroying” might not be the right word exactly. It was more like that giant tomato was instantly pulled through the rift into an alternate dimension (or time). That’s been happening for the past few days. But more recently, the rifts seems to be behaving a little differently.

On the Fortnite: Battle Royale subreddit, Reddit user TimSad shared a video of a new rift they discovered that’s nowhere near any landmarks on the map. Instead, this rift is simply hovering over an empty patch of grass on the side of a cliff. That might not sound like a big deal, but it quickly sparked an interesting new theory about how the map could change heading into Season 5.

“Nothing at the location of the new one so is it gonna GIVE us something?” TimSad asked in the original Reddit post.

In the subsequent comments, Fortnite fans extrapolated on what that “something” might be. Will the rifts spit out those missing landmarks and objects? Will the Tomato Town mascot show up on the top of a mountain heading into Season 5? Will it be the same size or bigger?

“That’s what I was curious about,” Reddit user Haunting Pineapple wrote. “What if everything going into the warp comes back out but it’s like massive or something? Not huge, but as though you could enter it and it’ll just be a random spot to grab loot from? Probably not what’s gonna happen lol but it’d be cool.”

This could be a clever way for Fortnite to reshape its map heading into Season 5 without making any major changes. Instead of creating an entirely new map, why not just move things around? It’s an elegant solution, but it may be a big of a letdown for anyone hoping the game might take us through one of those rifts and into an entirely new world.