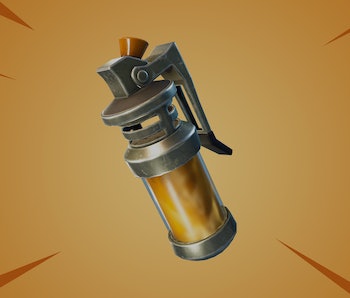 Things just got a whole lot stinkier in the world of Fortnite: Battle Royale. A new update to the version 4.4 finally added the Stink Bomb as a new grenade, along with an exciting new game mode called Final Fight.

Downtime for the new update began circa 4 a.m. Eastern, and Epic Games posted the official patch notes by 7 a.m. confirming that the update was live.

Here’s the official description for the Stink Bomb:

Creates a stinky cloud that deals 5 damage every half-second within the cloud.

Can be found from floor loot, chests, and Vending Machines.

Loot in stacks of 3 with a maximum stack of 5.

One thing we still don’t know for certain is the exact area of the cloud, but 5 damage every half-second for 9 seconds means a total of 90 damage just from the grenade, assuming the person that gets hit is stuck inside the stink blast radius.

It’s also worth nothing that this new update increased the reload time for every Rocket Launcher in the game. Despite this slight nerf, they’ll probably still remain high-priority weapons that’ll work well in conjunction with the new Stink Bomb.

Also consider, however, that the Stink Bomb is pretty much as rare as you can get in Fortnite: Battle Royale. It’s by far the rarest grenade in the game, even rarer than the Sticky Grenade. And because it’s “Epic” rarity, that means the backdrop will be orange. You’ll find one about as often as you come across Chug Jugs, the orange Epic SCAR, Minigun or the Rocket Launcher.

That being said, when players do actually find a Stink Bomb, it’ll definitely take priority over many other weapons or items. Especially in close quarters or when assaulting an enemy squad’s base, Stink Bombs will probably be incredibly useful, especially when used in conjunction with other explosives or even a Boogie Bomb.

The newest limited-time game mode to hit the game is “Final Fight: Teams of 20” which eschews the typical “last man standing” format of most matches. In this game mode, “Storm Circles give players more room to hunt down opponents,” meaning that once it moves three times, the storm stops closing in, allowing players to use the remaining space as they see fit. Whichever of the five teams has the most remaining players wins, which does mean that matches might end in a tie.

This seems like a decent prelude to the looting-focused Score Royale game mode that’s supposedly in the works.

It doesn’t look like the Stink Bomb or Final Fight will factor into any future weekly Challenges this season, but we’ll know for sure when Week 8 starts on Thursday, June 21 at 4 a.m. Eastern.