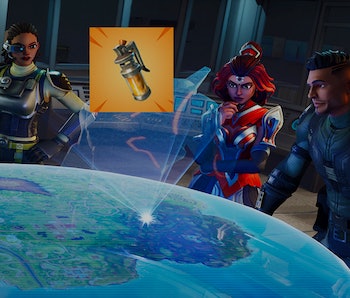 There’s a new weapon coming to Fortnite, and it could mean big changes for how you play the game. Epic Games is adding what’s effectively a poison grenade to Fortnite: Battle Royale, but it’ll be called a “Stink Bomb” instead so it sounds a bit more fun.

Epic Games made the Stink Bomb official with an in-game tease on Monday morning. According to the description, which should pop-up if you’re playing the game, the Stink Bomb “explodes into a cloud on impact and slowly damages anyone inside.” This’ll make the Stink Bomb the only damage-over-time weapon in Battle Royale.

It could also be the best method for flushing an enemy squad out of a well-fortified base, especially if you can combine it with the Boogie Bomb (another weapon that causes your opponents to dance uncontrollably).If you manage to get your hands on both of those items, you could effectively force enemies to dance in place while they’re taking stink damage.

Functionally, it’ll probably work similar to the Smoke Grenade that was previously in the game but later removed. But rather than just emitting plumes of smoke that can obscure vision, the Stink Bomb will also have that stinky toxic effect.

Beyond a few sparse details, there’s not much info yet. How far will the gas spread be? How much damage will it actually do? How long will the damage last? And how rare will the Stink Bomb be? Judging by the background color, they might be golden Legendary, which would make them some of the rarest grenades in the game.

If an entire squad tossed a barrage of regular Grenades, Boogie Bombs, and a Stink Bomb or two, that could be an entire team kill in seconds —depending on the frequency of drops, potency of the weapon, and how it may or may not combo with other items like the Boogie Bomb or even standard grenades.

This official announcement for the Stink grenade comes after the new grenade first emerged last week as part of a data mine discovered as part of the data mine from @TwoEpicBuddies that revealed an image of the Stink Bomb. That same version 4.4 data mine included tons of revelations like some Blockbuster skins and the direction of the game’s story.

The Stink Bomb could hit Fortnite: Battle Royale as early as Tuesday morning at 4 a.m. Eastern, but Epic Games also could wait until the standard weekly reset on Thursday at the same time instead.

Whenever they do arrive in Fortnite: Battle Royale, they’re bound to be a coveted item as teams figure out ways to use them every time they rush an enemy base.

More like this
Gaming
3 hours ago
Everything We Know About Fortnite's Dragon Ball Super Crossover
By Joseph Yaden
Gaming
Jan. 24, 2023
Fortnite x Dead Space crossover cosmetics and quest challenges, detailed
By Joseph Yaden
Gaming
Jan. 24, 2023
Fortnite is about to get a Wild Dreams concert from The Kid LAROI
By Jess Reyes
LEARN SOMETHING NEW EVERY DAY.
Related Tags
Share: