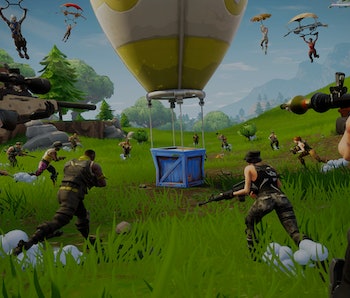 If surviving long enough to become the last man standing in Fortnite is a real challenge for you, you may soon have another path towards victory.

The new mode “rewards players who like to explore and search for loot” by having players “earn points by opening loot containers, using foraged items, and eliminating other players.” Rather than winning by being the last one standing, players can achieve Victory Royale by reaching a “High Score threshold.”

Usually, information from @TwoEpicBuddies is based on data-mining from the actual game, so it’s therefore rather accurate. Here’s the tweet directly from them that explains more:

So it does seem like the standard Fortnite rules will still apply to “Score Royale” matches, at least to a certain degree.

Enemy players can and will kill you while you’re looting, which would remove you from the match and prevent you from winning, obviously. We’re also assuming that the storm will close in as normal, which will inevitably push players into confrontation as usual.

In a sense, this does feel like only a slight variation on the standard game mode, but it’ll also cater to a much more defensive playstyle. Players will probably focus on landing at destinations on the outskirts of the map where they are less likely to encounter opposition. That way, they can loot and gradually work their way inward. This sounds like a pleasant alternative to 50 players skydiving to the same general vicinity in the vast majority of matches.

The current meta does favor the skilled and aggressive players that focus on murdering their opponents rather than hiding and looting. A top-tier player with a “bad” loadout can probably still kill an enemy player who focuses too much on looting, and killing someone with tons of great gear is oftentimes better than finding three Chests at once.

So for those players who are good at the opposite, avoiding enemies and slowly gathering their gear, this new game mode might sound like a much better way to play.

There’s no telling exactly when “Score Royale” could hit Fortnite, but with only three weeks left in Season 4, we’d wager it could happen in early July… assuming it is indeed real that is.