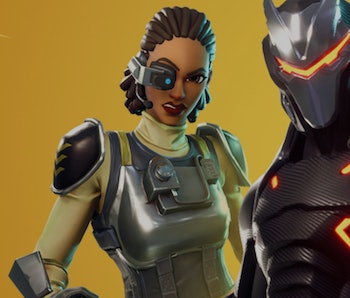 Epic Games announced a new limited time mode for Fortnite that will attempt to find the best players and reward them with bucks. V-Bucks, that is.

The new Solo Showdown Limited Time Mode went live on Thursday. Solo players can participate in what will be a competition to see who’s the best Fortnite player. From May 17 to May 21, those who jump in the new mode will earn points corresponding to their placement in the match. The points from 50 games will be counted and the top 100 players will receive V-Bucks to spend on in-game items, with the top player receiving 50,000 V-Bucks.

Epic posted a breakdown of how points will be rewarded and rules on its site. As expected, winning a match will gain the most points (100) while players who finish in 76th-100th place will receive 25 points. Pro players will go for the wins, but if you’re not a pro that wins matches on a regular basis, there are some other strategies to consider.

To place high, players will need to survive. A way for players not to survive is joining the other 50 players who land in Tilted Towers. Look for less populated starting areas that have easy access to weapons, shield potions, healing items, and wood. Your best bet is the Architect’s House near Wailing Woods.

No matter how hard you try, you will have to contend with other players, and no one will watch your back. Make sure to get a shotgun for getting up close and personal with other players and another weapon for long range. If you’re skills of sniping are not up to snuff, then get an assault rifle instead. Go with the new Burst Assault Rifle for good damage at a long distance.

There is no way around it, winning in Fornite means you have to build. Towards the end of the match, building a fort to protect yourself is the difference between winning and losing. It’s also the safest way to heal or use a shield potion.

Since placing higher will earn players more points than being a bit more patient will help. Specifically, when the storm moves in for the first time. The storm will wipe out all the AFK players who haven’t been eliminated yet and will clear out the other players who were forgetful and didn’t move fast enough.

Audio cues are a big help in Fortnite. It’s easy to get distracted when paying attention to what’s in front of you, but it’s easier to pick up on the direction players are coming from with a pair of headphones on. Getting to higher ground is also a strategic advantage in both firefights and scouting out areas.

Be a Sneaky Bastard

The fewer clues you leave behind means it’s less likely that other players in the area will be on their guard. Don’t build extra structures for the fun of it or to save a few seconds to get to the second floor of a building. Get in, loot, and get out of a place with as little trace as possible.

Fortnite’s Solo Showdown Limited Time Mode will end on May 21 at 10 a.m. Eastern. Players who made the top 100 will receive a message from Epic on May 25.

Players who want in-game content without having to compete for it should check out the Weekly Challenges. For Week 3, players have to collect rubber ducks and follow a map to get more Battle Stars.

More like this
Gaming
6.21.2022 7:36 PM
How to complete Nindo Challenges and earn the Manda Glider in Fortnite
By Joseph Yaden
Gaming
12 hours ago
Genshin Impact Sumeru leaks reveal 8 characters coming in version 3.0 or later
By Jess Reyes
Gaming
6.29.2022 9:00 PM
Everything we know about Tower of Fantasy, the upcoming Genshin Impact rival
By Jess Reyes
Related Tags
Share: