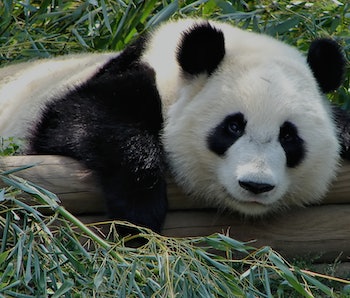 Giant pandas diverged as a singular bear species around 20 million years ago and settled in what eventually became the Chinese provinces of Shaanxi, Gansu, and Sichuan. Now, we know they’re great at eating bamboo and terrible at doing the dirty, but their evolutionary past is still largely a mystery. On Monday, researchers report in Current Biology that they’ve discovered a never-before-seen lineage of giant panda, in turn shedding light on their long lineage.

What they present as evidence stems from a 22,000-year-old bear skull found in a cave called Cizhutuo in the Guangxi Province of China. In the study, the scientists note that the location of the fossils is special because no pandas live in that province today.

Analysis of mitochondrial DNA pulled from the fossils reveals that these pandas genetically separated from the lineage of present-day pandas 144,000 to 227,000 years ago. While it’s clear they formed their own territorial group, what happened to them later on is another scientific puzzle, as these pandas aren’t living today. However, this evidence, which is the oldest panda DNA specimen known to date, adds support to the idea that pandas used to be much more widespread.

“Using a single complete mtDNA [mitochondrial DNA] sequence, we find a distinct mitochondrial lineage, suggesting that the Cizhutuo panda, while genetically more closely related to present-day pandas than other bears, has a deep, separate history from the common ancestor of present-day pandas,” study co-author and Chinese Academy of Sciences researcher Qiaomei Fu, Ph.D. explained in a statement released Monday.

Using sophisticated methods capable of pulling DNA from fossils found in subtropical environments, Fu and her team grabbed and sequenced nearly 150,000 DNA fragments to create a complete mitochondrial genome. They found that the Cizhutuo panda, in comparison to living giant pandas, contained 18 mutations that likely altered the structure of proteins coded by six of its mitochondrial genes. These mutations, along with evidence of amino acid changes, supports the idea that living in Guangxi caused these pandas to change and adapt to a climate different than their more inland peers.

To determine how this ancient bear fits onto the panda family tree, the researchers also compared the newly sequenced genome to mitochondrial genomes sequenced from 138 present-day bears and 32 other ancient bears. This process revealed that the split between the Cizhutuo panda and the ancestor of present-day pandas goes back about 183,000 years.

With less than 2,500 giant pandas left on Earth today, “it is unclear how well genetic data from extant and historical giant pandas reflect the past,” the team writes. Now that we know that the past included at least one other type of panda rolling and roaming in parts of China where no wild pandas live today, we have all the more reason to preserve the ones we have left.

“This really highlights that we need to sequence more DNA from ancient pandas to really capture how their genetic diversity has changed through time,” says Fu, “and how that relates to their current, much more restricted and fragmented habitat.”

Now that you’ve read about cute giant pandas, learn why your brain freaks out when you see cute animals: