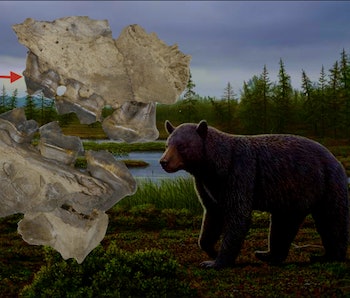 Bears have a reputation for having a sweet tooth, and a new paleontological discovery of 3.5-million-year-old bear bones reveals that this reputation is more than just a stereotype. On Monday, researchers from the Canadian Museum of Nature and the Natural History Museum of Los Angeles announced in Scientific Reports that their discovery led them to identify a close relative of modern bears: a very big boy who loved to gorge itself on sweet berries.

This basal ursine bear, scientifically known as Portactos abstrusus, was slightly smaller than living black bears, with teeth that were riddled with cavities, which the researchers say is both the oldest evidence of a high-calorie diet in bears and indicates that “oral infections have a long evolutionary history” in animals. The teeth appeared to be a hodgepodge of primitive dental features and more advanced characteristics, and the cavities they carried are thought to be caused by the bear’s sugary diet.

“It is a significant find, in part because of all other ancient fossil ursine bears, and even some modern bear species like the sloth bear and sun bear, are associated with lower-latitude, milder habitats,” Carleton University biologist and study co-author Natalia Rybcynski, Ph.D., said in a statement.

“So, the Ellesmere bear is important because it suggests that the capacity to exploit the harshest, most northern forests on the planet is not a innovation of modern grizzlies and black bears, but may have characterized the ursine lineage from its beginning.”

The revelation that this animal is a basal ursine bear is a product of two decades of discovery. Over the past 20 years, bones from the skull, jaw, teeth, and bits of skeleton from two individuals were collected from a site called Beaver Pond on Ellesmere Island, a northern territory located in the Canadian Arctic Archipelago. This bear’s life on Ellesmere Island would have included 24 hours of darkness in winter and six months of ice and snow, making its berry-heavy diet more than just comfort food for a terrible winter — it’s what the bear would have needed to bulk up, hibernate, and survive.

As the most northernly primitive basal ursine bear ever discovered — it was previously only known to exist because of the discovery of one tooth found in Idaho — this bear gives us a unique look at what the ancestor of modern bears may have looked like. Although this bear is not a direct ancestor of the modern American black bear, it does represent one of the first bears that immigrated from Asia to North America.

While having a mouth full of cavities doesn’t sound ideal, it was likely a small price to pay for the ability to survive the winter. Bears today continue their ancestors’ ability to balance out a diet that would be severely detrimental to a human: Bears have the same level of metabolic health before and after they eat a high-fat diet and can maintain bodies that are 30 to 40 percent fat.