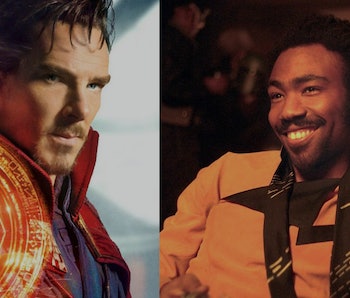 If there are two criticisms thrown at Saturday Night Live lately, it’s the vast amount of jokes about President Donald Trump and the dozens of celebrity cameos. The cast made fun of the former point during their Mother’s Day show, and on Saturday, the show brought in plenty of celebrities including an Avenger and a space smuggler to poke fun at the latter point.

Tina Fey hosted the SNL season 43 finale on Saturday. In her monologue, Fey took questions from the audience. It was the first question from Jerry Seinfeld that mentioned the criticism of having too many celebrity cameos. Then what followed were more questions from other celebrities who just happened to be in the audience such as Benedict Cumberbatch, Chris Rock, Robert De Niro, Anne Hathaway, Fred Armisen, Donald Glover, and Tracy Morgan. Each celebrity had a fairly innocuous question, but the obvious joke was how many famous people were thrown into the segment.

Glover, who was the show host and musical guest on May 5, asked a question referencing his appearance, asking if anyone saw his hat that he left behind. When he hosted, Glover promoted his upcoming appearance in Solo: A Star Wars Story and debuted his song “This is America,” which reached number one on the Billboard Hot 100 chart in its first week.

Cumberbatch asked two questions. The first was if Kennan Thompson was going to be on the show (yes) and then if the show would be willing to replace Thompson with someone more famous, implying he would be the man for the job. Cumberbatch hosted SNL back in November 2016 to promote his Marvel movie, Doctor Strange.

SNL will return in the fall for Season 44. None of the cast members officially announced they were leaving the show during the finale, but expect some changes over the summer.

Before the final fade to black, an image of Margot Kidder was shown. She hosted SNL on March 17, 1979, to promote her film The Amityville Horror. Kidder died on May 13.