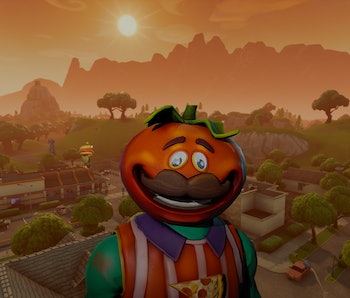 The Fortnite: Battle Royale Season 4 Week 2 Challenges have leaked ahead of the official start time, and from the looks of them, players will have to wander around the whole map with special focus given to Greasy Grove and Tomato Town.

Thanks to Fortnite Tracker data mining Fortnite on a weekly basis, we know what each week’s Challenges are ahead of time. The data for Week 2 was pulled back on May 1, but since Week 2 starts on May 8, everybody’s already gearing up for a new set of Challenges that release the same day Avengers: Infinity War’s Thanos invades Fortnite. We won’t know for sure what the Challenges entail until they go live on the morning of May 8 at 4 a.m. Eastern, but Fortnite Tracker has a history of being quite accurate. So you can probably take the following Challenges as a certainty:

Based on the Challenges listed above, you can expect a lot of players to land at either Tomato Town or Greasy Grove in Week 2 as they hunt for chests in the former and kills in the latter. Damage with suppressed weapons is straightforward enough, and explosive weapon kills should be easy for anyone that gets their hands on a Rocket or Grenade Launcher.

The potentially more time-consuming Challenge has you dance in front of seven different film cameras. You’ll have to look across the map for the many film sets and studios added as part of Season 4, especially around the Risky Reels area. Look for big green screens across the map, and cameras that look like this:

Since Season 4’s many meteor impacts changed the face of the Fortnite map, there are consumable meteorites at the many impact craters peppered around the map. Here’s where those “Hop Rocks” come in, because they’re peppered around each impact crater, big or small. When consumed, they reduce the influence that gravity has on your character’s movements for a short amount of time. Considering how many of these rocks line the huge crater at Dusty Divot, you might be able to complete this Challenge in a single match if you just run around there. Thankfully, you don’t have to do this one in a single match, which makes this one pretty easy.

All of these Challenges should go live Tuesday at 4 a.m. Eastern, which is probably also when a new limited-time Infinity War crossover game mode should deploy.