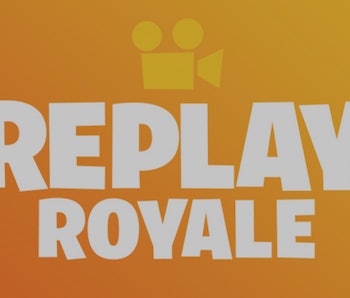 Since the 3.5 update went live on Fortnite, players dealt with a mess of issues such as problems with the guided missile, “dick bullets,” and a shutdown of the game servers for an extended amount of time. Epic Games worked on fixing the problems with patches, but now there’s a new problem with a recently added feature.

Part of the 3.5 update was the inclusion of a replay system that allows players to save a video of their Fortnite matches in order to create their own highlight reel. Some players noticed that after installing the 3.51 patch, their previously saved replay files were corrupted. A representative from Epic Games went to Reddit on Friday to explain that as of right now, replays saved on previous updates of the game will not work on the newest update. This makes replays saved on update 3.5 unplayable after updating to version 3.5.1.

Epic plans to fix the issue by allowing replays to work on each patch until a new update is added. When fixed, this will let replays recorded on the 3.5 update, for example, work on version 3.5.1 and so on, but will not work when the next major update, such as 3.6, goes into effect. This could limit replays to last a couple of weeks since Epic updates Fortnite quite frequently.

On the same thread, Fortnite players on the PlayStation 4 posted about the various issues they’re having with the replay system such as not being able to save replays at all. The Epic Games representative did confirm they were aware of the issue but did not have a timeframe on when it will fix the problem.

There is no date set for the replay system fix. Epic Games released version 3.5.2 update for Fortnite on Wednesday that included various fixes, a new light machine gun, and the return of the 50v50 v2 Limited Time Mode.

This issue regarding Fortnite replay system comes at an inconvenient time for players since Epic Games announced last week the Fortnite Royale contest, which will award players prizes for the best replay.

More like this
Gaming
15 hours ago
Everything We Know About Fortnite's Dragon Ball Super Crossover
By Joseph Yaden
Gaming
Jan. 24, 2023
Fortnite is about to get a Wild Dreams concert from The Kid LAROI
By Jess Reyes
Gaming
Jan. 24, 2023
Fortnite x Dead Space crossover cosmetics and quest challenges, detailed
By Joseph Yaden
LEARN SOMETHING NEW EVERY DAY.
Related Tags
Share: