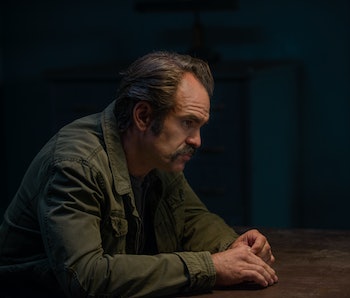 On the same night the WWE holds its annual extravaganza WrestleMania, The Walking Dead held its own smackdown between Negan (Jeffrey Dean Morgan) and Simon (Steven Ogg). In the end, Negan wins, because they’re all Negan. This spells doom for the Hilltop in next week’s big finale.

In “Worth,” the penultimate episode of The Walking Dead Season 8, Negan strikes back against the attempted coup arranged in secret by Simon and Dwight (Austin Amelio). Throughout the episode, Negan feeds his two turncoats false information of the Saviors’ next move to essentially starve the Hilltop by taking up strategic positions around their home base. In a really bad move, Simon and Dwight try to pass the information onto the Hilltop, only for Dwight to learn that Negan was just messing with them.

But how did Negan know Simon and Dwight were planning anything? A Savior named Laura (Lindsley Register). Presumed dead from when Simon had officially turned on Negan weeks ago, Laura had actually survived and was picked up on the side of the road by Negan last week, revealing to him the rats in his inner circle. Truly, Negan isn’t kidding when he said he’s everywhere.

Though Simon met his fate at the literal hands of Negan in the Saviors’ little fight club, Dwight is in for a fate worse than death. Now that he’s Negan’s “right hand man,” Negan tells Dwight that he has plans for him. You can already guess that it ain’t going to be a walk in the park for poor Dwight.

Meanwhile, Eugene’s (Josh McDermitt) ego has officially gone to his head. Behaving like his benevolent master Negan, Eugene gets a rude awakening when he’s briefly taken hostage by Daryl (Norman Reedus) and Rosita (Christian Serratos). Officially, Eugene is on the Saviors’ side, and there’s no sympathy from him from his former friends at the Hilltop. Knowing this, Eugene vomits his gross mac and cheese on Rosita to escape, allowing him to resume his production on bullets for the Saviors.

Bad intel, Simon being dead, and lethal, working bullets? Next week, Walking Dead goes out with a bang.

The Walking Dead airs Sundays at 9 p.m. Eastern on AMC.