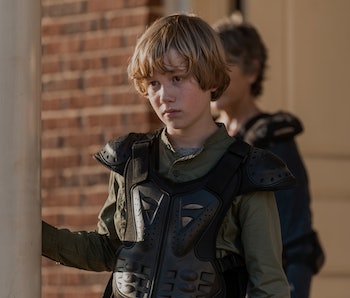 The Saviors are loose, and Henry is to blame. As The Walking Dead approaches its Season 8 finale, Henry just made things worse for everyone at the Hilltop by accidentally letting the imprisoned Saviors free. Some stayed, but most escaped to run back to Negan — who, by the way, has been “replaced” by Simon (Steven Ogg) in his absence. After a night of terror, things don’t look good for the Hilltop, and for the season finale in a few short weeks.

In “Do Not Send Us Astray,” Negan is still missing after being captured by Jadis. Capitalizing on the power vacuum, Simon leads a group of Saviors in an attack on the Hilltop. But for maybe the first time ever, Rick’s side was well-prepared, with traps and paths to bottleneck the Saviors into soaking up bullets.

Unfortunately, Simon didn’t bring the Saviors to kill them — just to hurt them. And hurt them, Simon did, by using Negan’s great secret plan: Infect the Hilltop with walker blood. It works, and soon enough Hilltop’s wounded turn into zombies in their sleep. It’s the great undead Trojan Horse, as the Hilltop eats their own in a night of chaos.

But that’s not the only thing that went awry.

Henry (Mascen Lintz), who is still mad he doesn’t know who killed his brother, steals a gun and enters the pen where all the Saviors are kept. As the hysteria begins, the Saviors take advantage and rush to their escape outside the Hilltop’s walls. At least, most do. A few do not. Remember Maggie’s benevolence a few weeks ago? Her kindness pays off this week, with some Saviors sticking with the Hilltop and choosing to fight against Negan’s tyranny.

If there’s one word to sum up “Do Not Send Us Astray,” it’s impatience. For Simon, his impatience to claim Negan’s spot gave the Saviors a win in their war against Team Rick. But in the aftermath, Team Rick catches on to their strategy. And while they’re many men short, they will certainly find a way to counteract what could and should have been Negan’s killing stroke.

For Henry, his impatience to fulfill his revenge cost Team Rick what could have been their ace in the hole. Leverage, body shields, even converts, you name it — Team Rick could have used the numbers (and viciousness) of the Saviors to their advantage. But because of Henry, they’ve just lost what was their best bartering chip.

All of this just guarantees how devastating the incoming Season 8 finale will be. On one side, there are Saviors who are downright pissed about being imprisoned for weeks, and want nothing more than Maggie’s head on a pike. On the other, there’s a down-but-not-out Team Rick who may come up with a countermeasure against Negan’s big plan. As The Walking Dead barrels towards the end of another year, destruction is inevitable.

The Walking Dead airs Sundays at 9 p.m. Eastern on AMC.