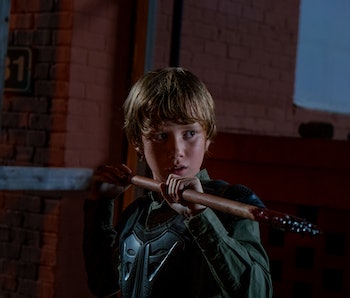 Carl may be gone on The Walking Dead, but Alexandria may have a new angsty teenager to take his place. In the show’s mid-season return, “Honor,” Henry (Macsen Lintz) became a badass overnight, piercing Ezekiel’s captor with a stick using maneuvers he learned from Morgan. The episode firmly established Henry’s proficiency in combat, but it also revealed an unnerving darkness within him that could set him up to be the next Carl Grimes.

Minor spoilers for The Walking Dead, and some light allusion to comic spoilers, are ahead.

On Sunday’s episode of The Walking Dead, Henry came to the aid of some of the show’s biggest badasses, Carol, Ezekiel, and Morgan. As the three debated what to do with Ezekiel’s captor, Henry comes out of nowhere and impales the captor with his stick. “I had to,” Henry says in a rather cold and merciless tone.

For those who forgot about Henry during the show’s ten-week hiatus, Henry is a Hilltop survivor whose brother was killed by the Saviors earlier this season. Since then, Henry has tried to step up and become a soldier for the Kingdom, but his young age and small stature has compelled adults to keep him away from the action. This arc culminated in “Honor,” when it turns out Henry is a lot more lethal than his appearance lets on.

Like a lot of characters on The Walking Dead, Henry isn’t based on anyone in the original comic series. But, Henry does appear to be a great substitute for Carl. In his final moments, Carl remembers a long-forgotten moment in Season 3, when he also ruthlessly killed one of the Governor’s people. (Also, remember the Governor?)

What this means for Walking Dead readers is that Henry could take on Carl’s comic book storylines that the actual Carl can no longer fulfill on the show, since he’s dead. It’s similar to Enid, another TV original who has functioned as a de facto Sophia, Carol’s daughter who died a long time ago in the series.

Now that Carl is out, it may be Henry — whose tendency for violence could make him a liability — that winds up under the bizarre stewardship of Negan, if Negan ever finds himself imprisoned in Alexandria. Just as likely, it could be Henry instead of Carl in all those wonderful daydreams where everyone is at peace.

The Walking Dead airs on Sundays at 9 p.m. Eastern on AMC.