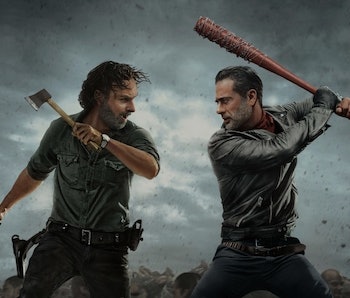 The Season 8 finale of The Walking Dead is finally upon us next week, and as we go hurtling towards the epic conclusion to the “All Out War,” there’s only so much time left to answer tons of important questions.

In this season’s penultimate episode, “Worth” we finally saw the long-delayed death of Simon and we also saw the good guys capture Eugene, promising a thrilling conclusion next week that’ll finally resolve this war. Will Rick actually kill Negan? Or will he spare him like in the comics?

Perhaps the most important bit of character development came in the emotional opening of the episode in which Rick finally read the letter that Carl wrote for him. It was an emotional one about a sentimental memory from when Carl was a kid and felt safe, and the scene served as a necessary bridge to get to a place where Rick might actually show mercy in the end.

With only one super-sized finale episodes left in this season for *The Walking Dead, here are 4 important questions that remain:

4. What Plans Does Negan Have for Dwight?

After what feels like forever, Negan finally figured out that Dwight has been double-crossing Negan for the longest time after Laura showed up to tell him as much. Yet rather than kill Dwight immediately, Negan lets him live as his new “right-hand man.” So what sort of weird, convoluted plans does he have for Dwight?

Reason tells us that he’s going to force Dwight to do something horrible to betray Rick and the rest of Hilltop all before dying, but considering how crazy Negan is, who knows what will actually happen.

Based on everything we know about the Season 8 finale, the Saviors use Father Gabriel as bait of some kind. And this comes after spending a huge portion of the season sick. He’s been imprisoned for basically all of this season by the Saviors, and things have never looked worse for him. Chances seem pretty high that he’s going to get caught in the crossfires. Either way, Gabriel doesn’t have much of a place moving forward in the show. He does survive passed this point in the comics, but he offers a very minor presence.

2. Seriously, Who is Flying That Helicopter?

Perhaps this season’s biggest mystery has to do with this helicopter that pops up every now and then. It has some kind of connection to Jadis that we can’t fully understand.

It’s all been coming to this: Will Rick actually spare Negan in the end, which is what his dead son wished? Or will he kill the bat-wielding maniac who probably deserves it?

Carl’s legacy in the back-half of this season has been the letters he wrote while waiting to die, and Rick finally read the one addressed to him. It detailed mostly the idea that Carl wanted his father to move passed his rage and vengeance to build a better future.

“If they won’t end it, then you have to,” his letter read. “You have to find peace with Negan, to find peace moving forward. … Every life is worth something.” Reason tells us that the Hilltop folks will win the battle after one or two important characters die, and in the final moments, Rick will actually spare Negan.

But will The Walking Dead do what’s “right” or will it follow its heart and do what will drive its audience most crazy? We’ll have to wait and see.

More like this
Entertainment
7.29.2022 12:30 PM
Bruce Campbell vs. the Marvel Cinematic Universe
By Jake Kleinman
Entertainment
7.30.2022 1:30 PM
'Mandalorian' Season 3's biggest mystery could be solved by 'Andor'
By Dais Johnston
Entertainment
8.4.2022 10:00 AM
Will there be an Orville Season 4? How the sci-fi show could return
By Ryan Britt
Share: