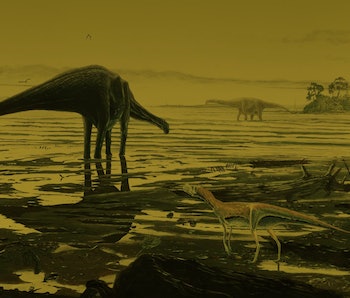 The dinosaurs that reigned between 66 and 247 million years ago were massive — some even heavier the space shuttle Endeavour. It seems fitting that they’d meet their end at the hands of a force as powerful as an asteroid and the catastrophic volcanic activity that followed. But a sneakier, more sinister culprit was already wreaking havoc on the dinosaurs long before that asteroid pummeled into the Yucatan Peninsula, evolutionary psychologists argued on Tuesday. In their radical new study, they place the blame on toxic plants.

In the paper, published in the February edition of Ideas in Ecology and Evolution, the University of Albany’s Gordon Gallup, Ph.D. and the University of Baltimore’s Michael Frederick, Ph.D. assert that food poisoning killed the dinosaurs long before the asteroid hit. They call their idea the “biotic revenge” hypothesis.

“Since the spread of toxic plants occurred slowly, that [the hypothesis] is consistent with recent evidence showing that dinosaurs began to disappear millions of years before the asteroid impact and continued to go extinct for millions of years later,” Gallup, a psychology professor at the University at Albany, tells Inverse. “Thus, dinosaurs may have gone extinct because of a simple psychological deficit.”

According to this hypothesis, large, herbivorous dinosaurs ate huge quantities of plant life, including the first toxic angiosperms, which, in turn, gave the dinosaurs great gastrointestinal distress. But because they hadn’t yet figured out taste aversion — that is, learning not to go back to the heinous place last gave you food poisoning — they continued to eat the toxic plants, eventually consuming harmful and lethal doses. This effect of their psychological deficit, they write, “placed additional stress on the species” and “may have done particular damage to dinosaurs” before the asteroid arrived.

The idea of biotic revenge fits in with the increasingly accepted idea that dinosaurs were already in decline millions of years before their semi-final extinction. The fossil record indicates that, before the end of the Cretaceous Period, there already was a slump in dinosaur populations and an increase in the diversity of birds. When Gallup learned that the first toxic plants appeared in the fossil record at about the same time dinosaurs began to go extinct, it dawned on him that this gradual extinction may be linked to the angiosperms.

“The intriguing feature of evolutionary theory,” says Gallup, “is that it enables you to think about things outside the box.”

To back up this claim, Gallup and Frederick examined studies on development of taste aversion among animals that outlived the dinosaurs. Birds, which are thought to have evolved from small meat-eating dinosaurs like velociraptors. Previous studies have shown that present-day birds are capable of learning food aversions, though they do so by sight rather than taste: For example, birds know bright orange monarch butterflies are filled with milkweed toxins, so they’ve learned to avoid them. Gallup and Frederick argue that this psychological ability may have helped birds avoid the fate of other dinosaurs.

They also reevaluated research on crocodilians — which share a common ancestor with dinosaurs and are the closest living relative of birds — that had been conducted by Gallup in 1987, showing that some species didn’t have the capacity for learned taste aversion. By inducing sickness in a group of caimans to see whether they’d associate illness with certain types of foods, they discovered that the caimans were always willing to eat anything, whether it made them sick or not.

This inability to learn taste aversion is a trait that the study authors think could have been shared by dinosaurs, but a lucky quirk of habitat saved them from extinction. The reason that crocodilians didn’t go extinct, they write, is “that being aquatic carnivores, they never had to cope with the problems posed by consuming toxic terrestrial plants.”

Gallup and Frederick are well aware that this unusual hypothesis may make skeptical paleontologists ask: What do a couple of psychologists know about dinosaur extinction? Rather than scoff at their theory, however, they hope paleontologists will help them evaluate the fossil record further in order to test their hypothesis with empirical evidence.

So did early toxic plants enact a biotic revenge? More evidence is necessary to say so definitively. But if dinosaurs really were munching down toxic plants despite extreme belly pain, it’s theoretically possible that their fatal psychological deficit pushed them toward extinction. The asteroid, says Gallup, “certainly played a factor,” but it’s plants that may have “placed severe strain on the species.”