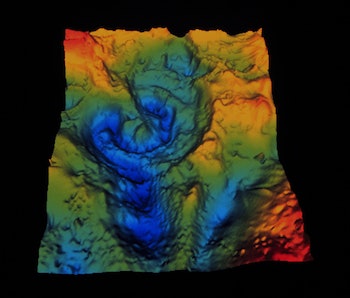 Out in shallow seas off the coast of Mexico, a research vessel is drilling deep into the sea floor in a quest to find traces of the asteroid that wiped out most of life on earth 65 million years ago, including almost all of the dinosaurs. The scientists on board hope to find the scattered remains of the space rock, and unlock secrets of extinction and survival — maybe even of alien life.

You would think that the impact site from a collision of that magnitude would be obvious, but millions of years of weathering and geological transformation have mostly hidden the crater. It wasn’t until 1991 that scientists noticed the remains of a crater, 110 miles across, centered near the village of Chicxulub on the Mexican Gulf Coast. It wasn’t for decades after that the link between that geographical feature and the dinosaur extinction was widely accepted among researchers.

Today, the plan is to drill cores of Earth and analyze them in an attempt to separate out which bits were new arrivals to the planet at the time of the crash. It won’t be easy — the space rock was all but obliterated by the impact, which released as much energy as 100 trillion tons of TNT. The immediate fallout was a blast of intense heat, from rocks that were launched out into the atmosphere before falling back down at great speeds. Animals that survived this initial assault next had to contend with a dramatic change in Earth’s climate, as clouds of dust and ash filled the skies, sending the planet into a deep freeze that lasted for years.

The researchers are looking for clues not only to how life disappeared, but to how it came back. Layers of sediment more recent than that of the asteroid impact itself will tell a story of how organisms came to recolonize the area following the crash. The scientists suspect that microbial life may have found a suitable home early on in that process.

“There’s so much fracturing of rocks inside the peak ring [of the crater impact site] that you think hot fluids rushed through it, that we might anticipate that there’s a great place for microbial life to occupy,” Sean Gulick, professor at the Institute of Geophysics of the University of Texas, told AFP. If that theory holds up, it could give extraterrestrial scientists a leg up in their hunt for alien life, since it would suggest that crater sites might be a good place to begin the search.

The scientists have parked their research vessel, the L/B Myrtle, off the coast of Mexico’s Yucatan peninsula, on the peak of elevated ring of sea floor created by the impact. The ship was designed not for scientific research but as a support vessel for offshore oil and gas operations. The boat can lift itself off of the sea floor using three stilts, which creates a stable but temporary platform. A drilling rig has been welded to the side of the vessel for this particular operation.

Other scientific vessels made specifically for seabed drilling, including the JOIDES Resolution and Japan’s Chikyū, could not be used for this particular mission because they require deeper ocean to operate, according to Kevin Kurtz, an aficionado of seafloor science.