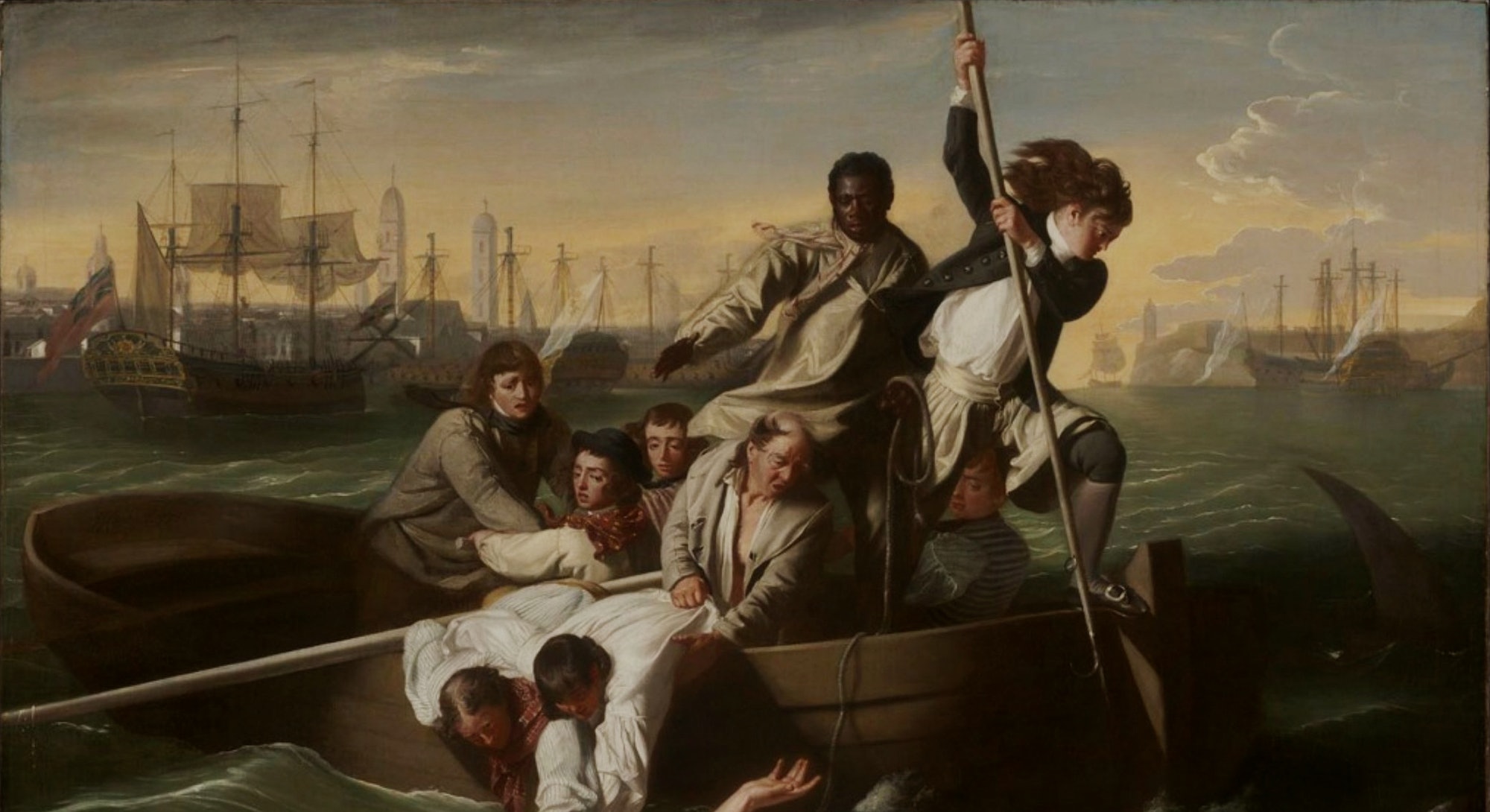 Another Shark Week is upon us. Yes, it’s that time of year where the most fundamentally sound concept takes over broadcast television. The idea is this: Show people sharks for a week. That’s it. The documentaries (scientifically accurate or no) don’t need to work on a second level because Lamniformes blow the human mind. And it has always been thus. Just ask America’s first great painter (sorry Trumbull), John Singleton Copley.

Copley was a New England boy, trained at least in part by his stepfather and particularly gifted with oils. He was also a big-time snob, who saw Boston as a provincial cow town unable to provide him with the sophisticated audience he deserved.

Even as anti-colonial sentiment went horse-and-buggy viral, Copley looked to London and dreamt of meeting the Europeans giving him props for the portraits he’d had hung in foreign exhibits. In 1774, he booked a ride and made his way to London, where crossed paths (likely for the second time) with English trader Brook Watson, who was then lobbying for the execution of Ethan Allen. More interested in art than politics, Copley must have listened attentively as Watson explained how he’d come to have a piratical peg leg.

The story, which seems just true enough to justify inclusion in the Shark Attack Database, went like this: In his days as a sailor, Watson had been swimming in Havana harbor when he was attacked by a massive shark that grabbed him by his shin. The shark circled back for the kill, but fellow members of Watson’s crew got there in time and speared the beast, saving the would-be merchant from death by gnashing jaws.

It is hardly improbable that someone was attacked in Havana Harbor. Though most sharks are not particularly liable to attack humans, Tiger Sharks, which were fairly common off of Cuba and Florida, are opportunistic hunters.

The shark that Copley depicted in his masterful “Watson and the Shark,” doesn’t look particularly like a Tiger Shark. It’s too long, isn’t shaded properly, and possesses bizarrely feminine lips. Furthermore, it’s almost certainly not a White Shark, which an Englishman would have probably called a “Pointer” for its sharp nose. Speciation aside, what Copley’s shark most certainly represents is a collective fear of the leviathan that lurks beneath the waves and catches man out of his element. The animal has a gaping mouth, focused eyes, and is moving toward Watson, who is naked in the classical, allegorical way, at speed. Basically, it’s the poster for Jaws remixed with a biblical allusion to the Leviathan.

Copley exhibited the work next to the following explainer: “A boy attacked by a shark, and rescued by some seamen in a boat; founded on a fact which happened in the harbour of the Havannah.”

And people ate it up. The painting was such a sensation that Copley was elected to the Royal Academy the following year, proceeded to create two more versions of the same painting, and made a great deal of money off the prints. For his part, Watson took advantage of the well-engineered publicity to push his already high profile that much higher. He would eventually be elected Lord Mayor of London and, in 1803, made a Baronet. On his new coat of arms, he elected to put a trident, a big fish, and the right lower leg that dangled off of Copley’s painting.

Copley died a rich man and American painters took note. Throughout the nineteenth and early twentieth centuries, the shark painting genre continued to flourish. Winslow Homer, another New Englander, paid unabashed tribute to Watson’s shark and Anton Otto Fischer, who was best known for his work for the Saturday Evening Post, created an image of shark hunting that seems to actively poke fun at Copley for not saving the leg. Damien Hirst pretty much shut the thing down by simply putting a preserved shark in an art gallery. You can’t top that — unless, of course, you can actually show the shark biting down.

Shark Week shows a lot of biting. That’s the point of the thing and also the innovation at the core of it. The Discovery Channel’s toothy cash cow is the next logical step for American shark art and it is — in it’s way — beautiful. The medium changes, but the suspense stays the same. Is the shark going to eat the human? Maybe a little, but you can’t sell death (or advertisement next to death) at a markup.

This article was originally published on July 6, 2015.