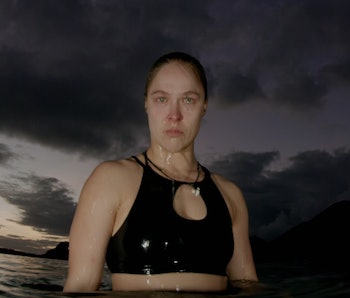 Anyone who watched Ronda Rousey’s Shark Week debut “Ronda Rousey Uncaged” on Sunday may have been expecting the typical outbursts of aggression for which she is infamous. Instead, when Rousey descended 100 feet below the surface and went face-to-face with 30 to 40 bull sharks, she remarkably kept her cool — a feat that surprised many viewers and shark experts alike.

In the segment, Rousey went into battle with a host of the ocean’s most formidable animals on their own turf, without a protective cage. While floating on the surface, she went toe to toe with a mako shark, batting it away from floating bait with a stick. Below the water, she dove deep into the territory of bull sharks, which are known to charge its prey at “the drop of a hat,” says Paul de Gelder, the shark attack survivor and Navy diver who trained Rousey in the months leading up to her showdown. Both of these situations required intense dive training and some serious mental preparation. Rousey has drawn criticism for her lack of composure in the past, but de Gelder tells Inverse that Rousey was a surprisingly good student, mastering a the key mental element of shark diving: confidence.

“It’s an absolutely daunting experience that takes lots and lots of confidence, and that’s what Ronda had in spades,” de Gelder says.

As Discovery demonstrated in a 2008 test, sharks are more likely to approach rapid, pounding heart beats because they are the classic physiological signs of terrified, easy-to-catch prey. Being calm and confident, on the other hand, can keep autonomic responses like heart rate under control — reducing the odds that a shark might mistake you for something edible.

Rousey, whose time in the UFC was marked with controversy, isn’t a stranger to intense mental and physical training. However, the former bantam weight champion’s career is marked with some notable blows. In 2015, she lost the UFC title to Holly Holm, the underdog at the time, and in 2016 she lost again to challenger Amanda Nunes in the first 48 seconds of the match. Those two losses led USA Today to report that Rousey’s confidence was “shattered beyond repair,” and she has since retired from UFC fighting to pursue a career in professional wrestling. Needless to say, stakes were high for Rousey when she met de Gelder with the intention of regaining the confidence she had lost in the ring, 100 feet below the water’s surface, surrounded by hungry bull sharks.

“Ronda had never dove until we asked her to be a part of this show,” de Gelder says. “So she was building from the ground up in a very intense short period of time for a hugely intense exercise.”

De Gelder used his own experience and expertise to design a plan to acclimatize Rousey not only to diving but to the presence of several sharks at once. “It’s very step by step, you have to be comfortable in the water, and we surrounded her with sharks just to make sure she wasn’t going to freak out.”

It was when she came face to face with the sharks that Rousey surprised even veteran shark experts. Despite having only completed eight dives, de Gelder noted that she displayed “confidence in spades.” At times she was even a little overconfident, he notes, and the team had to pull her back to keep the situation in check.

De Gelder had trained to swim, feed, and interact with bull sharks several years ago, after a bull shark attack left him without an arm and a leg. He notes that it’s no easy feat to enter bull shark territory, even for people who have been diving for years. “I basically crapped myself,” de Gelder says of his first time diving with bull sharks. “I let go of the fish head too early and I dropped it in the camera man’s lap and he freaked out. There’s fish absolutely everywhere, just trying to see through them is hard enough.”

And so, Rousey’s performance particularly impressed de Gelder, who has spent countless hours watching divers interact with sharks. And while she didn’t get to use all her UFC moves, she did get to use her UFC mindset to tackle some serious mental obstacles. “She did amazingly,” he says. “I couldn’t have been prouder of her.”

More like this
Science
8.17.2022 11:00 AM
These fish don’t just make antifreeze — they bleed it
By Elana Spivack
Culture
8.17.2022 11:30 AM
10 years ago, one macho blockbuster beat Fast & Furious at its own game
By Sam Comrie
Science
22 hours ago
The Webb Telescope will use this epic cosmic gadget to reveal hidden wonders
By Doris Elín Urrutia
Related Tags
Share: