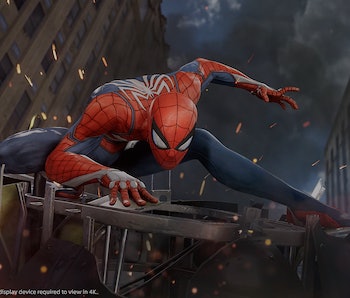 Marvel fans will soon do whatever a spider can in Spider-Man for the PlayStation 4. But the game, which has just been announced for September 7, will differ from the Marvel Cinematic Universe in one big way: Peter Parker is no freshman to the superhero lifestyle. The PS4 Spider-Man will be older, wiser, and a lot more experienced than his cinematic counterpart.

On Wednesday, Game Informer uploaded brief interviews with Insomniac Games, the developers of Spider-Man for the PlayStation 4. Art director Jacinda Chew explained that Insomniac’s Spider-Man is a lot older than most other versions of Spider-Man currently around.

“Our Spider-Man is a more experienced,” Chew told Game Informer. “He’s not just learning how to swing. He swings with a lot of style and a lot of confidence.” Insomniac’s Creative Director, Bryan Intihar, also said that Peter Parker is “not just 15 years old and that “he’s not just getting used to his powers.”

“We wanted to play up the fact that he can juggle between melee and environmental action and gadgets and switch between them pretty quickly,” he added.

An older Spider-Man is a lot different than most people are familiar with at the moment (save for readers of Amazing Spider-Man). In the juggernaut Marvel film franchise, Tom Holland’s Peter Parker is significantly younger than most of the other Marvel heroes.

Spider-Man for the PS4 has drawn comparisons to other games like Batman: Arkham Knight and Middle-earth: Shadow of Mordor, as an open-world exploration game with players given access to a unique inventory of special abilities. Demoes for Spider-Man have revealed a lot of big details, including stealth and QTE (quick-time event) sequences, as well as characters like Mister Negative and Miles Morales, who in the comics also becomes Spider-Man.

Spider-Man will be released on the PlayStation 4 on September 7.

Update: A previous version of this article mentioned Chip Zdarsky’s Peter Parker: The Spectacular Spider-Man as portraying a younger Peter Parker. It doesn’t, but the comic is meant to be a throwback to Spidey’s younger days before he became a CEO to a mega tech company. This article has been updated.

More like this
Gaming
6.21.2022 4:27 PM
Everything you need to know about Crisis Core: Final Fantasy VII Reunion
By Hayes Madsen
Gaming
6.17.2022 4:00 PM
The agony and ecstasy of PlayStation trophy hunting: "It's a huge drop of serotonin”
By Joseph Yaden
Gaming
6.16.2022 5:03 PM
Marvel XCOM release date, trailer, and leaks for the Firaxis game
By Joseph Yaden and Willa Rowe
Related Tags
Share: