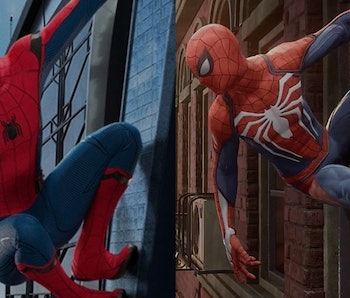 If the latest gameplay revealed at E3 for the upcoming Spider-Man on PlayStation 4 is any indication, then video game Spider-Man could mop the floor with Tom Holland’s rookie Peter Parker from the MCU.

Sony released an extensive gameplay demo at the end of Sony’s E3 2017 press conference, and in it, a veteran Spider-Man battles with Mister Negative and his gang of Demons. He also loosely allies himself with Wilson Fisk, aka Kingpin. Throughout this, Spidey executes a diverse array of maneuvers and uses his webs in ways Tiny Tom couldn’t even dream of.

That might be because — as it’s been confirmed by IGN’s hands-on first impressions of the game at E3 — this 23-year-old Peter Parker has been Spider-Man for eight years. He’s got a lot of experience under the belt, and has had the time to make enemies and friends while improving his skills and gadgets; he can do so many different things in the game that would be hard to imagine in the MCU.

For one thing, Spidey can whip forward like a bullet through the sky using webs if he needs to catch up to a helicopter, and he pins thugs to walls with webbing about as often as he uses strings of webbing to whip heavy objects at their heads to knock them out.

Like Batman in the Arkham games — which, yes, Spider-Man shamelessly and gloriously rips off to great success — this Spider-Man spends a lot of time crawling in the rafters waiting for choice moments to strike. He picks his battles and fights in a smart, tactical way.

This Peter didn’t have anybody hand-holding him and giving him a shiny new suit with gadgets. Though we still don’t know the purpose behind the white spider on the chest of Spider-Man’s costume in the game; it definitely isn’t borrowed Stark tech.

On the flip side, Tom Holland’s Peter Parker is still young and learning the ropes. All of the Spider-Man: Homecoming trailers indicate that Peter still has a lot of growing up to do. Tony Stark does take the suit from Civil War back, stripping him of all his fun gadgets so he can learn for himself what kind of hero he needs to be.

Spider-Man on the PlayStation 4 will be an open-world game with missions punctuated by quick-time events, all with the “momentum” and “fluidity” of games like Sunset Overdrive with the feel of the Batman Arkham games.

Spider-Man will be released sometime in 2018.

More like this
Gaming
7.5.2022 4:00 PM
The 10 best PS Plus Essential, Extra, and Premium games
By Joseph Yaden
Gaming
6.23.2022 12:30 PM
Known gamer Ted Cruz would love these 6 pay-to-win games
By Willa Rowe
Gaming
20 hours ago
Everything you need to know about Square Enix’s Forspoken
By Corey Plante and Robin Bea
Related Tags
Share: