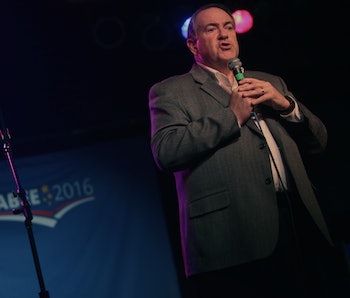 Former Arkansas governor Mike Huckabee has tried and failed at many careers, but perhaps none of his attempts have been as sad as his effort to be a stand-up comedian. Rather then letting a lack of a stage stop him, he’s taken his act to Twitter, where on Tuesday, he tested a new bit about his colonoscopy, Russia, and Michael Jackson’s death.

In addition to making a “RUSSIAN MEDDLING” joke and a butt pun about “MOON”-walking, Huckabee boasted about getting put to sleep “w/ same stuff Michael Jackon [sic] used.” Jackson died in 2009, and his autopsy revealed an excess of the anesthetic propofol. This may seem like a scary drug to use in routine procedures, but, as toxicologists maintain, the poison is in the dose. In an email to Inverse, Dr. Michael Ramsay, president of Baylor Scott & White Research Institute in Texas, explained that propofol is “probably the most used sedative for colonoscopies because it has a fast ‘On and Off’ action.”

Sedatives are necessary for colonoscopies because it is generally uncomfortable to stick a finger-thick, camera-tipped probe so far up your butt it touches your colon. But generally you want the effects of an anesthetic to wear off as soon as the discomfort is over, which is why propofol, which Ramsay says has “fast recovery with very few after effects,” is often used. The drug’s anesthetic effect can be local, or, as in the case of Huckabee and Jackson, general — meaning it puts you to sleep.

That means the drug is quite potent — controversially so. As such, says Ramsay, it must be administered by anesthesia trained personnel. “In many areas this precludes the gastroenterologist and his nurse from administering this drug unless they have undergone proper training,” he says. In these cases, untrained professionals must use other drugs: “This means that many will use midazolam and fentanyl that has a few more side effects and prolongs recovery,” he says.

As strong as the drug is, it’s not clear whether the short-lived anesthetic’s effects are to blame for Huckabee’s extremely weird, bad jokes. Nevertheless, not all doctors want their patients to be “moonwalking” out of the operating room; in recent years, some have called for colonoscopies to be propofol-free altogether.

While not everyone in America wants Huckabee around, he should be extra glad he’s in America. “In some European countries,” says Ramsay, “no sedation is administered!”

More like this
Innovation
Jan. 16, 2023
3D-printed “organs” could lead to better drugs
By The Conversation and Chengpeng Chen
Science
Jan. 26, 2023
JWST captures Chariklo’s rings and more: Understand the world through 8 images
By Robin Bea
Science
17 hours ago
NASA just directed its Lucy mission to target a skyscraper-sized asteroid
By Doris Elín Urrutia
LEARN SOMETHING NEW EVERY DAY.
Related Tags
Share: