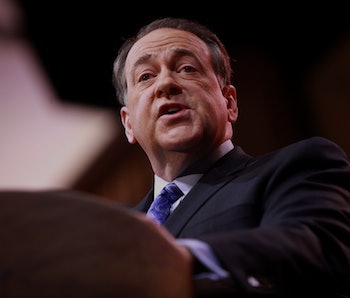 In last night’s GOP debate, former Arkansas Gov. Mike Huckabee introduced the concept of a DNA schedule on a national stage. We say “introduced” because, as far as we can gather, no one with a background in biology has previously ascribed meaning to that phrase. Here’s how the exchange with moderator Chris Wallace went down:

Governor Huckabee, like Governor Walker, you have staked out strong positions on social issues. You favor a constitutional amendment banning same sex marriage. You favor a constitutional amendment banning abortions, except for the life of the mother. Millions of people in this country agree with you, but according to the polls, and again this an electability question, according to the polls, more people don’t, so how do you persuade enough Independents and Democrats to get elected in 2016?

Chris, I disagree with the idea that the real issue is a constitutional amendment. That’s a long and difficult process. I’ve actually taken the position that’s bolder than that.

A lot of people are talking about defunding Planned Parenthood, as if that’s a huge game changer. I think it’s time to do something even more bold. I think the next president ought to invoke the Fifth, and Fourteenth Amendments to the constitution now that we clearly know that that baby inside the mother’s womb is a person at the moment of conception.

The reason we know that it is is because of the DNA schedule that we now have clear scientific evidence on. And, this notion that we just continue to ignore the personhood of the individual is a violation of that unborn child’s Fifth and 14th Amendment rights for due process and equal protection under the law.

It’s time that we recognize the Supreme Court is not the supreme being, and we change the policy to be pro-life and protect children instead of rip up their body parts and sell them like they’re parts to a Buick.

Set aside that bit about tearing down the Supreme Court and the not-so-veiled swipe at Planned Parenthood — what, exactly, is a “DNA schedule”? Science Twitter was baffled, as is the U.S. National Library of Medicine’s PubMed database (“Quoted phrase not found”).

The Huckabee campaign did not immediately respond to a clarification request from Inverse; perhaps, because, as Fusion writer and neuroscience Ph.D.-holder Daniela Hernandez believes, it’s a term that Huckabee invented. As New York Times health care reporter Margot Sanger-Katz noted on Twitter, this wasn’t the first time Huckabee has used the phrase “DNA schedule.” In a Fox News opinion piece, the perpetual presidential hopeful describes a DNA schedule thus:

Life begins at conception, the science on that is actually settled. At the moment of conception, 23 male and 23 female chromosomes create a new DNA schedule. The DNA that is created at conception is the same DNA that will exist in each human for the rest of his or her life.

The basic biology — male and female human gametes (and, yep, they have 23 chromosomes apiece!) do indeed combine to create a diploid zygote — is correct. But this, of course, is not science that we just now discovered, which makes the statement “we now have clear scientific evidence on” a bit bewildering. (Unless, you know, Huckabee is taking the 4.5 billion-year history of Earth view, in which case yes this is a “new” discovery and so is our newfangled “gravity.”)

Does the fertilization and creation of a zygote (which is not a pinpoint moment but a series of biological fusions and transformations) kick off the process of human development? Barring medical exceptions, it would be hard if not impossible to argue the contrary. Everything else is the scientific-philosophical equivalent of a nine-car pileup: Are zygotes, because they can become human beings, worth protection under the Constitution? Are they equivalent to human beings? The question here, really, is: When does “life” begin? Is it conception? (Some scientists, who would scoff at the idea of a DNA schedule, say yes. Plenty of others disagree.) This is not a new debate, or one with several other points in time proposed. It ain’t settled, and it sure doesn’t follow a DNA schedule.