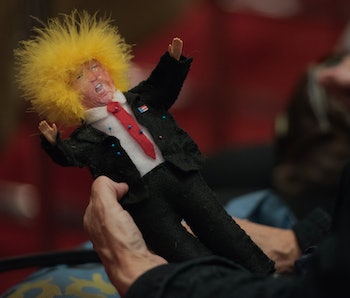 For the majority of Americans, life is stressful because of work — a pressure point that can lead to burnout and emotional instability. While chowing down on comfort food or cuddling a pet may seem like the good ways to deal with the panic from the nine-to-five, a new study suggests something a tad different: stabbing a voodoo doll that looks like your boss.

In a paper released in the February edition of Leadership Quarterly, a team of psychology and business management researchers argue that retaliation isn’t always a dysfunctional way to deal with a problem. Symbolic retaliation, they show, can actually be a beneficial way of feeling the satisfaction of revenge without actually causing harm. In the study, subjects who harmed a voodoo doll that represented an abusive supervisor experienced a sense of justice that ended up benefitting the emotional stability of the company as a whole.

“As weird as it sounds, yes, we found a simple and harmless symbolic act of retaliation can make people feel like they’re getting even and restoring their sense of fairness,” co-author and Wilfrid Laurier University professor Lindie Liang, Ph.D., told The Telegraph in early March. “It may not have to be a voodoo doll per se: Theoretically, anything that serves as a symbolic act of retaliation, like throwing darts at a picture of your boss, might work.”

In the study, her team asked 229 American and Canadian study participants to think of a time when their supervisors wronged them in the workplace. Then, some of them took a minute to take out their emotions on virtual voodoo dolls with pins, pliers, or fire before the whole study group completed a fill-in-the-blank word task. In interviews afterward, the experiment showed that the people who engaged in the symbolic retaliation task had their feelings of injustice lowered by one-third.

“These findings suggest that retaliation not only benefits individual victims but may also benefit the organization as a whole, given that justice perceptions is important for employee performance and well-being,” the authors write.

Of course, if you want to keep your job, you might want to keep your stabbing private. While company sanctioned voodoo dolls aren’t part of employee benefits just yet, polls consistently show that bad managers are the reason employees look for new jobs. Nevertheless, voodoo dolls may have come a long way from their British medieval origin, but they’re still a pretty good way to help out the serfs.