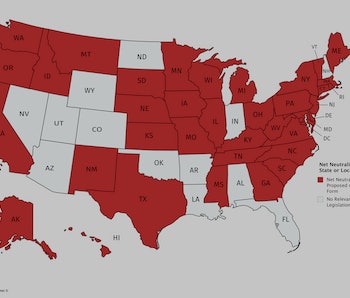 In the three months since the FCC decided to repeal existing net neutrality protections, a sizable political coalition has worked to reinstate net neutrality through a variety of legal procedures. Both at the state and municipal level, open internet advocates and politicians have launched into action, ranging from lawsuits to executive orders to legislation in order to save the internet as we know it.

Check out the maps below to see if — and how — your region is fighting for net neutrality.

The map above shows the general scope of net neutrality activism nationwide. Every red state is engaged in some effort to protect net neutrality at either the state or the municipal level. As of April 16, there are only 13 states with no relevant action at the state level or in any city.

As seen in the map above, 31 different states have proposed legislation to adopt net neutrality regulations.

Only two states — Washington and Oregon — have already passed laws in their state legislatures protecting net neutrality statewide. Their legislation basically reinstates the Obama-era regulations repealed by the FCC, meaning that ISPs won’t be able to block content or establish fast and slow internet lanes once it goes into effect in June. Some believe that Washington and Oregon’s legislation might provoke a lawsuit from the FCC, because the December repeal of net neutrality stipulated that city and state governments were prohibited from drafting their own rules. Because the FCC’s new plan isn’t set to go into effect until April 23, we might have to wait to see if the FCC pursues action against Washington and Oregon.

The other states that are considering varying degrees of net neutrality legislation are:

Let’s Just Sue the FCC and Be Legends

State attorneys in the District of Columbia and 21 states have filed lawsuits against the FCC claiming that the new regulation violates the Constitution, among other things. A petition to the Washington D.C. Court of appeals highlights their concerns.

State petitioners seek a determination by this Court that the [FCC] Order is arbitrary, capricious, and an abuse of discretion within the meaning of the Administrative Procedure Act; violates federal law, including, but not limited to, the Constitution, the Communications Act of 1934, as amended, and FCC regulations promulgated thereunder; conflicts with the notice-and‐comment rulemaking requirements of 5 U.S.C. § 553; and is otherwise contrary to law.

In fact, every state with a Democratic Attorney General filed a lawsuit. These states include:

New York City Mayor Bill de Blasio recently announced the formation of Mayors For Net Neutrality. This new coalition is comprised of mayors committed to fighting for net neutrality by withholding municipal contracts from any ISPs that don’t conform to the old net neutrality regulations. Members so far include:

The net neutrality repeal is set to go into effect on April 23 in the absence of congressional action. Senate Democrats have mounted a campaign to strike down the FCC’s ruling through a Congressional Review Action (CRA), but the effort has stalled. Assuming that no CRA is passed, it will be up to state and local governments to adopt their own net neutrality regulations, and deal with any action that might come back at them from the Trump administration or the FCC.

This story will be updated regularly. Last updated on April 16.