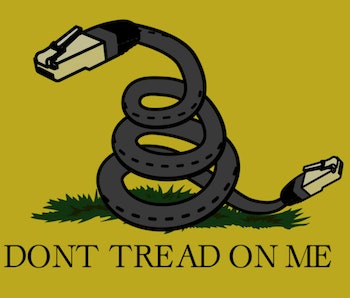 On Monday, Montana’s governor signed an executive order mandating that all state contracts with internet service providers adhere to net neutrality standards, a move that directly contradicts the FCC’s repeal of federal net neutrality regulations. On Twitter, Governor Steve Bullock shared a word document detailing the executive order, encouraging other states and cities to use the template to file their own.

“Montana’s future depends on a free and open internet,” Bullock said in a Twitter message. “Today we became the first state in the nation to actually do something to safeguard internet freedom.”

Large ISPs, such as the likes of AT&T and Verizon, hold government contracts in Montana, reported the New York Times on Monday, and Bullock’s move could be a rapid-fire workaround for dealing with the FCC’s repeal of Obama-era consumer protections that held back ISPs from charging more for faster service for different types of content (hypothetical example: Amazon videos may load faster than YouTube videos when Amazon has a deal with Verizon).

Bullock also released a net neutrality template online so other legislators could follow in the footsteps of the Treasure State. “Any city or state can do this,” Bullock declared Monday afternoon, sharing a link to a downloadable executive order.

Titled “Executive Order Providing for Internet Neutrality Principals in State Procurement,” the template outlines the relationship the government has to ISPs, as well as the importance of a free and open internet. The template uses the word “jurisdiction” in brackets as an easy fill-in-the-blank for any state or city looking to adopt the document.

Here’s the full text of the template:

WHEREAS, the free and open exchange of information, secured by a free and open internet, has never been more essential to modern social, commercial, and civic life;

WHEREAS, guided by principles of internet neutrality, the information society and our economy have flourished;

WHEREAS, citizens rely on a free and open internet to meet the world—to learn, to entertain, to make informed personal choices about their families and to make public choices about our society;

WHEREAS, businesses rely on a free and open internet to enter new markets, to gain new insights, to recruit, to compete, and to grow—few changes in human communications have revolutionized commerce so quickly;

WHEREAS, educational institutions rely on a free and open internet to provide citizens with world-class educational opportunities;

WHEREAS, as federal regulators recently illustrated, a free and open internet is not guaranteed—it is susceptible to corporate and political degradation, and its protection requires constant vigilance by consumers, market participants, and governments alike;

WHEREAS, the loss of internet neutrality principles threatens to increase the costs of accessing and sharing information for people and for businesses alike;

WHEREAS, the Federal Communications Commission (FCC) has argued that violations of internet neutrality principles may violate state competition and fair trade practices laws, which requires the vigilance and attention of state governments;

WHEREAS, significant broadband and mobile internet services providers have made public pledges to adhere to certain internet neutrality principles in the wake of changes by federal regulators;

WHEREAS, [Jurisdiction] is a significant purchaser of internet services;

WHEREAS, the [Jurisdiction] has a distributed data storage model and thousands of employees across the [Jurisdiction]—paid prioritization and throttling could fundamentally impact state employees’ ability to conduct business; and

NOW, THEREFORE, I, [EXECUTIVE], [Title], pursuant to the authority vested in me under the [e.g., Constitution and the laws of the Jurisdiction], do hereby order and direct the [Procurement Department, e.g., Department of Administration] to incorporate into the procurement process for internet, data, and telecommunications services (collectively, “telecommunications services”) criteria requiring that successful recipients of state contracts adhere to internet neutrality principles.

After [Date], to receive a contract from the [Jurisdiction] for the provision of telecommunications services, a service provider must publicly disclose to all of its customers in the [Jurisdiction] (including but not limited to the [Jurisdiction] itself): accurate information regarding the network and transport management practices (including cellular data and wireless broadband transport), performance and commercial terms of its broadband internet access services sufficient for consumers to make informed choices regarding use of such services and for content, application, service, and device providers to develop, market, and maintain internet offerings.

Block lawful content, applications, services, or nonharmful devices, subject to reasonable network management that is disclosed to the consumer;

Throttle, impair or degrade lawful internet traffic on the basis of internet content, application, or service, or use of a nonharmful device, subject to reasonable network management that is disclosed to the consumer;

Engage in paid prioritization; or

A. End users’ ability to select, access, and use broadband internet access service or the lawful internet content, applications, services, or devices of their choice; or

This Order is effective immediately.