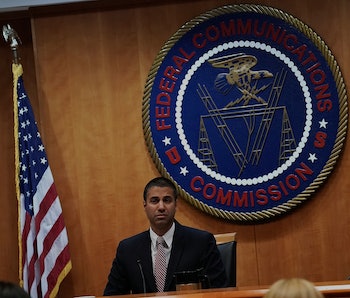 The Federal Communications Commission just voted to approve a plan that effectively ends net neutrality. The culmination of months of work by FCC Chairman Ajit Pai, Thursday’s vote means the internet may never be the same again.

Net neutrality is the longstanding principle that internet service providers like AT&T, Comcast, and Verizon — where Pai previously worked as a lawyer before his career at the FCC — cannot play favorites over access to content, create a tiered internet where sites or users that pay more have access to a fast lane, or otherwise control how people get online.

As expected, the vote was three in favor and two against, split along party lines. Chairman Ajit Pai received the support of both Republican commissioners for his plan, which he made public the week before Thanksgiving. Democratic commissioners Mignon Clyburn and Jessica Rosenworcel voted against the plan. The deliberations were interrupted for several minutes when, according to Pai, security advised them to take a recess.

Thursday’s vote reverses the 2015 decision of the Obama-era FCC, which reclassified ISPs as utilities instead of information services under what’s known as Title II regulations. That earlier move came in part because a 2014 court decision found the FCC could no longer impose net neutrality regulations on ISPs unless they were categorized as utilities.

The current FCC has argued Pai’s plan is just a return to the longstanding “light touch” regulations that had been in effect before that decision, eliding the role of the court decision in necessitating that change.

“There was no problem to solve,” Pai said in criticizing the Obama-era decision. “The internet was not broken in 2015. We were not living in some digital dystopia.”

In justifying the move, Pai repeated his frequently contested claim that the 2015 decision has stifled innovation and investment, which he argued is necessary to build the infrastructure to support the internet of 10 or 20 years in the future. He pointed to the dawn of the internet of things, the development of high-bitrate applications like virtual reality, and emergent applications like bitcoin mining.

The official name of Pai’s plan is “Restoring Internet Freedom,” a title Rosenworcel pushed back against in her dissent.

While Pai and his Republican colleagues repeatedly sought to assure those watching that nothing would change once this plan went into effect — Pai played down the move by saying the change from Title II to Title I could not be wonkier — their colleague Commissioner Clyburn argued the changes would start as gradual and insidious.

“When the current protections are abandoned and the rules that have been officially in place since 2015 are repealed, we will have a Cheshire cat version of net neutrality,” Clyburn said during her forceful statement, which began with a cry of “I dissent!”

“We will be in a world where regulatory substance fades to black and all that is left is broadband providers’ toothy grin,” she said, continuing the Alice in Wonderland reference. “And they have teeth. They will say those old comforting words, ‘Don’t worry, we have every incentive to do the right thing.’ But soon they will have the incentive to do their own thing.”

Thursday’s vote removes basically all restrictions on ISP behavior. During her own dissenting statement, Rosenworcel outlined what this means.

The FCC has argued consumer demand for net neutrality will incentivize telecommunications companies to keep these protections in place of their own accord, but Rosenworcel pointed out the problem with this argument.

“Half the households in this country have no choice of internet provider,” she said. “So if your broadband provider is blocking websites, you have have no recourse. You have nowhere to go.”

Pai touched on this issue during his statement, arguing it is in fact the 2015 plan that has made it impossible for new internet service providers to receive the investment needed to compete and expand options for consumers.

“When there is less investment, that means fewer next-generation networks are built — that means less access and less competition,” he said. “That means more Americans are stranded on the wrong side of the digital divide.”

For her part, Commissioner Clyburn pointed to the increasingly bipartisan outcry against the FCC’s plan, with a handful of Republican lawmakers joining Democratic colleagues in questioning the plan. She showed a huge stack of letters she had received from consumers and small businesses voicing their concerns. She emphasized how net neutrality will disproportionately impact vulnerable groups and communities of color, pointing to the importance of social media in putting a global spotlight on the 2014 protests of police violence in Ferguson, Missouri.

Chairman Pai has made the end of net neutrality his top priority since President Donald Trump appointed him FCC Chairman. He has courted controversy at every turn, from ignoring the apparent heavy use of anti-net neutrality bots during a public comment period earlier this year to appearing in staggeringly insulting videos released this Wednesday by the conservative site The Daily Caller in which he misrepresents the public’s net neutrality concerns as being about the end of memes or something.

The release of a draft copy of Pai’s plan in late November set off the latest round of protests in favor of net neutrality, with a nationwide day of demonstrations last Thursday organized around Verizon Stores. Inverse met some of the protestors at the New York event.

While Pai’s plan does call for a transparency provision in which ISPs must disclose their practices, Clyburn argued the move will strip the FCC of the ability to even monitor and understand the scope of telecommunication companies’ net neutrality violations, let alone do anything to curtail their excesses. These, she said, could include inscrutable below-the-line fees, unexpected price increases, and endless wait times for even basic customer service.

“Who will have [consumers’] best interests at hear in a world without clear and enforceable rules overseen by an agency without any clear authority?” she asked. “Will that agency be a toothless FCC?”

This decision may represent the FCC ceding its ability to control net neutrality, but this is not necessarily the final chapter. As with most government agency rulings, the FCC will be forced to defend the plan in court, which could tie up any changes going into effect all the way through the 2020 presidential election.

This was a point Rosenworcel emphasized in her attempt to end her statement on an optimistic note.

“If the arc of history is long, then we are going to bend it toward a more just outcome,” said Rosenworcel. “In the courts, in congress, wherever we need to go to ensure net neutrality stays the law of the land.”

More like this
Innovation
20 hours ago
Scientists create fake leaves that generate a clean fuel source
By Sarah Wells
Innovation
17 hours ago
Can we terraform Mars? Scientists may have made a major breakthrough
By Jeff Nagle
Innovation
8.16.2022 11:15 AM
After quitting the ISS, Russia reveals its next-gen space station
By Darren Orf
Related Tags
Share: