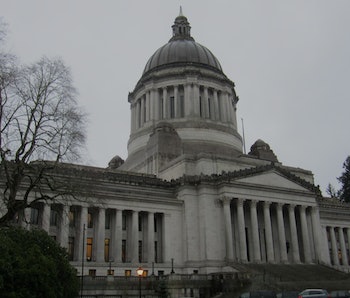 Washington State will protect net neutrality at all costs.

The Federal Communications Commission’s (FCC) repeal of net neutrality regulations is scheduled to go into effect around April 23, but State Representative Drew Hansen of Washington has proposed a way to protect constituents from Ajit Pai’s recent FCC ruling.

The state bill, titled HB 2282, will ensure Washingtonians aren’t cheated by service providers looking to capitalize on the lack of net neutrality regulations. The document states the bill is for “protecting an open internet in Washington.” While other states have erected executive orders that inhibit ISPs with state contracts from blocking or throttling online content, Washington’s plan applies to all internet service provided to all residents within the state.

For the rest of the country, if the FCC’s ruling goes into effect this spring, it could allow ISPs to control the type of internet content they provide customers, depending on how much customers pay. This means we could potentially see tiered internet access coming our way in the near future, with certain sites and platforms only available once users pay a premium fee.

The bipartisan bill proved to be a popular motion in the Pacific Northwest state; it passed through the state senate with a 35-to-14 vote.

While the bill might sound too good to be true, Hansen is confident it will override the lack of regulation to ISPs that the FCC is promoting.

“Just because the FCC claims it has the power to preempt state laws doesn’t mean that it actually does,” Hansen went on to explain. “I can claim that I have the power to manifest unicorns on the Washington State Capitol lawn. But if you look outside right now, there are no unicorns.”

Now, the HB 2282 bill just needs the signature of Washington governor Jay Inslee before it goes into law. If all goes as planned, Washington is poised to set the widest-reaching net neutrality regulations that defy the current administration’s repeal.