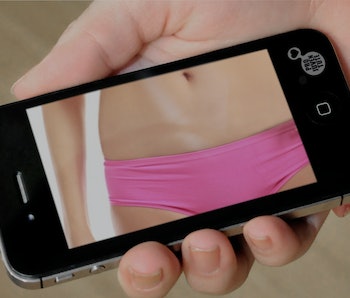 Sexting is increasingly becoming a part or modern romance, as smartphones and a multitude of messaging apps and sharing platforms make it easier than ever to send nudes. And for the most part, this act can be a healthy and fun part of any relationship. But for teenagers especially, sending sexual images or texts to a partner can cause unforeseen consequences. For young people who are just beginning to understand ideas of sexuality and consent, sexting can create the circumstances in which they could violate other’s privacy and expose themselves to the same.

To get a better idea of how prevalent different kinds of sexting behavior are, pediatricians conducted a wide-ranging study of teens’ sexting behavior, publishing their results on Monday in JAMA Pediatrics. Their observations on the prevalence of sexting were not especially surprising, but what they discovered about how often teens share others’ sexts without consent was quite concerning.

The disparity in the number of teens who send and receive texts suggests that some teens either send more than their fair share of messages or that their recipients simply may not reciprocate. But the more disturbing trend is the prevalence of teens sharing other’s sexually explicit messages and images without each others’ consent.

To conduct this study, the team performed a meta-analysis of 39 studies conducted between 1990 and 2016. In total, these studies included survey responses from 110,380 people between the ages of 11.9 and 17 years. Therefore, the results indicate that more than 13,000 teens reported forwarding someone else’s sexts without that person’s consent. The smaller number of teens who report that their sexts were shared without consent could indicate that the sharers have violated multiple people’s consent or that some people simply haven’t found out yet.

These concerns are very real and indicate the need for parents and other adults in positions of authority to have frank and honest conversations with teenagers about consent.

There is a comforting nugget to all this, though. While popular media may make it seem like kids are sexting younger and younger, the study’s authors say that sexting becomes increasingly prevalent the older the teens are.

“A higher rate among older youth is expected and generally corresponds to the age of sexual identity and exploration, which lends credence to the notion that youth sexting may be an emerging, and potentially normal, component of sexual behavior and development,” they write. That being the case, it’s never too early to talk to young people about consent.

IMPORTANCE The existing literature on sexting among youth shows that sexting is a predictor of sexual behavior and may be associated with other health outcomes and risky behaviors. However, there remains a lack of consensus on the prevalence of sexting, which is needed to inform future research, intervention, and policy development.

OBJECTIVE To provide a meta-analytic synthesis of studies examining the prevalence of multiple forms of sexting behavior, analyzed by age, sex, geography, and method of sexting.

CONCLUSIONS AND RELEVANCE The prevalence of sexting has increased in recent years and increases as youth age. Further research focusing on nonconsensual sexting is necessary to appropriately target and inform intervention, education, and policy efforts.

More like this
Science
8.5.2022 1:00 PM
The most miraculous sci-fi movie on Netflix reveals a scientific debate over aging
By Tara Yarlagadda
Entertainment
8.11.2022 6:19 PM
Brilliant Galactus theory solves the biggest plot hole of Marvel Phase 4
By Alex Welch
Gaming
22 hours ago
You need to play the most delightful management simulator on Xbox Game Pass ASAP
By Hayes Madsen
Related Tags
Share: