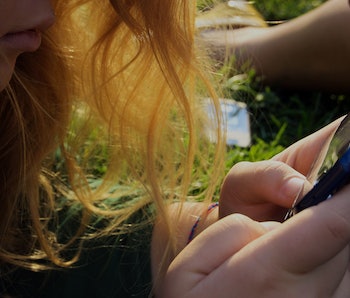 In the United Kingdom, teen sexting is a no-nonsense affair: Currently, anyone under the age of 18 who takes a nude selfie risks being prosecuted for creating child pornography, although the age of consent is 16. New guidelines, which are expected to be passed within the next few weeks, however, will prevent sext-sending teens from becoming labeled as sex offenders, suggesting that sexting is becoming the new normal and pressuring U.S. lawmakers to follow suit.

Guidance on the matter will reportedly “be sent to police forces within weeks” and will give officers the option to record sexting instances as part of a new category of crime, in which further investigation is “not in the public interest.” Police, after taking into account the age of the minor and whether sexting was mutual, will be given full discretion on how to pursue the case. The new guidelines advise minor incidents to be passed on to counsellors and social workers.

The new protocol for sexting between minors will also suggest that the individual’s police record will not be sent to the Disclosure and Barring Service, which employers consult when hiring. Over the past few years, Members of Parliament have argued that placing minors on the sex offender list for sexting is a draconian measure that could severely damage the professional lives and futures of UK minors.

In response to these changes, a spokesman for the National Society for the Prevention of Cruelty to Children told The Daily Mail that “Our stance has always been that we do not want children criminalized for sexting.”

While these changes are underway across the pond, law enforcement agents in the United States are still sorting out how to deal with sexting. Unlike the UK, the U.S. deals with sexting on a state-by-state basis; currently, 20 states have laws that specifically address the offense. In Florida, for example, a teen caught sending or receiving a sext is slapped with a $60 fine; in Hawaii, the same teen would be charged with a misdemeanor. Across the states, there is little consistency among laws, but advocates have argued that having some laws is better than having none: In states that don’t specifically address sexting, they argue, minors caught sharing nude photos are prosecuted under child pornography laws.

This means that if a 17-year-old boy sends a nude photograph to his 17-year-old girlfriend and, for whatever reason, the police find this photograph, both he and his girlfriend could face charges, including “sexual exploitation of a minor.” Some advocate that this is not only an overly harsh step by police, but also an infringement on the teenager’s constitutional rights of expression and sexual privacy.

“In an effort to register their contempt for child exploitation and sex crimes, lawmakers have defined sex offenses so broadly that a teen sending an explicit photo to a boyfriend or girlfriend can qualify,” writes Radley Balko in The Washington Post. “These stories [of minors being prosecuted] are all symptoms of our increasing tendency to use the criminal justice system to ‘fix’ the sorts of problems once addressed by families, schools, religious organizations, and other civic institutions.”

Dealing with the criminal ramifications of sexting is obviously tricky. The potential effects of the nude photos getting into the wrong hands — like bullying, exploitation, and overall life-ruining — are a very real concern. But as lawyer Joanna Lampe points out in the University of Michigan Journal of Law Reform, a teen purposefully sending another teen a nude photo is inherently different than an adult distributing child pornography.

“Criminalization does not resolve the issue of teen sexting,” writes Lampe. “Rather than threatening a few unlucky teenagers with severe punishment for a widespread and victimless activity, states should focus prosecutions on cases of nonconsensual sexting.”

Despite allegations that sexting is making perverse animals of America’s teens, sexting hasn’t been shown to do much harm on an individual level. Sure, studies have found that teens who sext may be having more sex than teens who don’t, but the act of sexting hasn’t actually been linked to increased risky sexual behavior. In 2014, University of Texas researchers asserted that sexting is typical adolescent behavior, with no associations with either good or bad mental well-being.