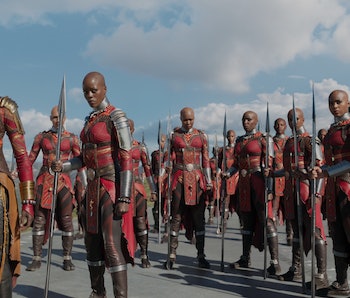 Black Panther never freezes, including at the box office. Marvel’s Black Panther, which premieres all across the United States today, has already grossed a projected $25 million from its preview screenings on Wednesday and Thursday. That’s ahead of this upcoming President’s Day weekend, when Black Panther is officially released in theaters.

In a report from Deadline, Black Panther is now the biggest pre-summer preview of all time, leaving previous winners like 2012’s The Hunger Games ($19.7 million) and 2016’s Deadpool ($12.7 million) in the dust. Furthermore, Black Panther is on track to beat two Marvel predecessors, 2016’s Captain America: Civil War and 2015’s Avengers: Age of Ultron.

In its preview run, Civil War earned $25 million, while the second Avengers film grossed $27.5 million in previews before it was released in May 2015. Though the numbers aren’t final yet, the cultural buzz for Black Panther can only make passing $25 million for Black Panther a strong possibility.

These earnings come before Black Panther is even officially in theaters. And pre-sale tickets are also through the roof: Fandango has announced multiple times that Black Panther is already a major winner, with pre-sales surpassing virtually every superhero movie, including films like Batman v Superman: Dawn of Justice. Black Panther is Fandango’s fourth-biggest pre-sale ever, behind only the recent Star Wars films (The Force Awakens, Rogue One, and The Last Jedi).

Internationally, Black Panther is also a colossal winner, earning $5.2 million in its first week in markets like the U.K. and Asia.

To say Black Panther’s records are impressive is an understatement. Historically, studios worked on the assumption that mass audiences don’t pay to see films with a predominantly black cast telling uniquely black stories. Of note was the $58 million blockbuster Red Tails in 2012, which told the story of the all-black Tuskegee Airmen during World War II. Red Tails ultimately only grossed $49 million domestically, and less than $490,000 worldwide. (The superhero genre has been something of an exception, with the Wesley Snipes film Blade being a major hit in 1998, and is largely responsible for kicking off pop culture’s superhero obsession.)

However, in 2017, the films Girls Trip and Get Out, both of which starred black actors in wildly divergent genres, showed the box office prowess of black filmmakers telling black stories. Marvel’s Black Panther is the third film in less than a year to prove it, which comes to theaters energized by the mega-popular Marvel brand and exposure that only a studio like Disney could afford. Star Chadwick Boseman will also return to reprise his role in a short few months, when Avengers: Infinity War arrives in theatrs on May 4.

More like this
Entertainment
5.5.2022 9:30 PM
Here's what Doctor Strange 2 really means for the Fantastic Four
By Eric Francisco
Culture
5.11.2022 12:00 PM
You need to watch the most unique time-travel epic ASAP
By Eric Francisco
Entertainment
5.6.2022 11:30 AM
You need to watch the best superhero movie franchise on Hulu before it leaves next week
By David Grossman
Share: