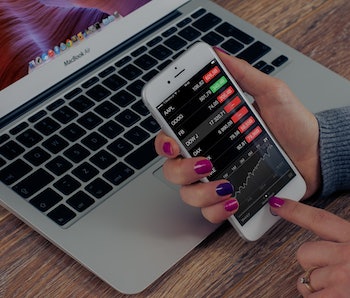 The Dow Jones Industrial Average swung 1000 points on Friday and, by the end of the day, its value had increased enough to bring the Dow out of “market correction,” a term that describes when an index or market decreases at least 10 percent from a recent record trading high, generally as a means to constrain stocks from becoming overvalued.

This follows both the Dow and the Standard and Poor 500 both officially entering into market corrections twice this week, while the Nasdaq was just a few tenths of a percentage point — 9.7 percent — from entering into correction as well. Two weeks ago on January 26, the Dow had reached a record high, closing at 26,616 marks.

The Dow Jones reflects the overall stock prices of the performance of 30 large publicly listed companies, divided by the “Dow divisor”, a figure that takes into account stock splits, spinoffs, and other factors that would affect structure.

Is a Market Correction a Big Deal?

Market corrections signify that a decrease is more serious than just a temporary dip in prices — but despite what the onslaught of news coverage this week would suggest, market corrections are actually normal. After all, what goes up, must come down.

Market corrections are not, in and of themselves, a huge cause for concern. They typically occur between every 12 to 24 months, but the stock market has been mostly on the rise since March 2009, after the 2008 financial crisis. In fact, the last market correction took place in February 2016, with 2017 being a remarkably stable year for the market. This means that a market correction was probably overdue, although investors may have become used to a seemingly new normal of market stability.

Besides, they don’t typically last long. John Prestbo at MarketWatch says that, according to his research, the average correction, a 13.3 percent decrease, lasts just 71.6 trading days, or about 14 calendar weeks.

What Contributes to a Market Correction?

Market corrections happen for a number of different reasons, and can be both unpredictable and not necessarily predictive of wider economic trends. This week’s volatility is partially the result of the latest jobs report in the United States, released February 2, which confirmed that wages are rising and that unemployment is low. This is great for the economy overall, but in the world of Wall Street, its raises fears of inflation. That in turn raises concerns that the Federal Reserve will increase interest rates to fight inflation.

And this did, in fact, happen, in the U.K. On Thursday, the Bank of England announced that it would be increasing interest rates, which contributed to the drop in trading prices.

Where Does This Leave Us?

What’s next? In all likelihood, the market will recover within the next four months. It may not return to quite the highs or the stability that we’ve gotten used to, but that might be a good thing, as it might mean less speculation.

And besides, the reason that the stock market is falling is actually because the U.S. economy is strong. Ironically, the correction is kind of the product of a good thing.