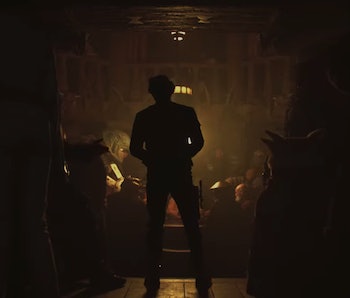 In Solo, the titular famous smuggler and scoundrel is tasked with stealing something from a crazy space strain called “the Conveyex.” But what could it be? New images and plot descriptions have emerged for upcoming standalone Star Wars movie, but it feels like Lucasfilm is hiding something big. Could the MacGuffin of the movie be a secret easter egg that references the rest of Star Wars?

On Wednesday, Entertainment Weekly revealed a slew of new exclusive photos from Solo, along with plot tidbits. For fans who have been wondering what the movie is actually about, the irony is that the more we know the less we seem to know. Screenwriter Lawrence Kasdan described the movie as a “bromance,” between Han and Chewbacca, while Lucasfilm president Kathleen Kennedy described Solo as “a heist, gunslinger type movie.”

The heist is happening on a train called the Conveyex, and is organized by criminal leader Tobias Beckett (Woody Harrelson) in the long-discussed role of Han Solo’s shady mentor. According to EW writer Anthony Breznican, Beckett is “…hoping to up his status with a big score by organizing a daring heist.” But why is the heist daring and what are they going to steal?

Because Solo really could be the first Star Wars movie not to depict the Force or have a lightsaber in it, is it possible that the plot will still connect to the Jedi? It seems insanely unlikely that nothing about the larger events of the galaxy will be mentioned in this film, especially considering this takes place only a decade after the events of Revenge of the Sith, and only about a few years after that prologue in Rogue One. In A New Hope, Han says he’s “never seen anything” that made him believe in the Force, but that doesn’t mean he wasn’t once hired to rip-off some ancient Jedi artifacts.

Back in April, many fans speculated that the rumored Solo character of Dryden Vos referenced a canonical Jedi Knight from Star Wars comics and novels. EW has revealed that Dryden Vos is actually a crime boss played by Paul Bettany, but that doesn’t mean a connection to the Jedi and the Force couldn’t be connected to the big heist. What if the secret cargo on the train is actually a person frozen in carbonite? And what if that person is a Jedi Knight? It would be crazy to say that such a person would be Obi-Wan Kenobi, but what about Ahsoka Tano?

So far, there haven’t been any huge connections to the rest of Star Wars revealed to be in Solo. That is, at least the ones we didn’t already know about. Fans knew Lando, Chewie, the Falcon, and yes, Han were in the film. But other aspects like Boba Fett, or Jabba the Hutt have yet to be teased or confirmed. And the fact that there’s a secret cargo on a train that needs to be stolen suggest that there are a lot more secrets in Solo that haven’t been revealed yet.

Maybe, like a good gambler, Lucasfilm has been keeping their Sabaac cards close to their vest with this one. With less than four months until Solo hits theaters, it’s possible that it may end up having the most surprises in any of the new Star Wars films yet.