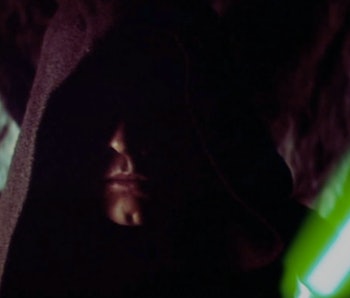 The last name of a new character in the upcoming Han Solo movie has created a fan frenzy about a secret Jedi Knight maybe hanging around in the 2018 Star Wars standalone adventure.

On Monday, rumor-generating fan site Making Star Wars reported that a character in the new Han Solo film will be named “Dryden Vos” and then immediately jumped to the conclusion that this character could be Quinlan Vos undercover or with a different name. Quinlan Vos is a canon Star Wars character who Obi-Wan Kenobi talked about once in Revenge of the Sith. Back then, Quinlan Vos had appeared in the ongoing Dark Horse comic book mini-series called Twilight. His apprentice, Aayla Secura, appeared in Attack of the Clones, and in Revenge of the Sith. Later, Vos himself has only appeared in canon in The Clone Wars cartoon, and the novel Dark Disciple, where it was revealed that he was the lover of the Sith Warrior Asajj Ventress. Hot.

So, could “Dryden Vos” be Quinlan Vos in disguise? It doesn’t feel quite plausible, but it’s not totally out of the question. If it is true, it would be in keeping with the Jedi tradition of going undercover with the crappy cover story of only changing your first name, like when Obi-Wan Kenobi became Ben Kenobi and somehow fooled everyone. Still, the theory that such a third-tier canon Jedi could show up in the Han Solo movie feels pretty unlikely.

But there is the pesky fact that Han Solo has some working knowledge of the Force in A New Hope. Where did he develop his prejudice against the Force? If the journey of Han Solo ends in The Force Awakens with him totally believing in the Force and the Jedi, then perhaps his disillusionment begins with Dryden/Quinlan Vos letting him down. And there is an old non-canon comic book story in which an undercover Quinlan Vos did, in fact, save a young Han Solo. This fact combined with the name “Vos” showing up has probably led hardcore fans — with good reason — to believe that Quinlan is indeed returning.

But will he? How could a standalone Star Wars movie explain his presence when he’s never been in a film? Because Rogue One brought back a very obscure character from The Clone Wars, it’s not still out of the realm of possibility that the Han Solo movie would pull something similar.

The Han Solo movie is scheduled for release sometime in 2018.